It is not my intention to post a load of poems on this blog, but I am currently working on translations of the Argentinian poet Joaquín O. Giannuzzi (1924-2004). None of his work, as far as I know, has yet been published in English. This poem reminded me of the cartoneros of Buenos Aires, an impoverished, nocturnal tribe who make a meagre living by collecting and selling discarded cardboard and other rubbish left out on the street.

Incidentally, as Jorge Fondebrider has pointed out, the poem was written 30 years before the cartoneros became an everyday sight, but the ideas in the poem linked to my own memories of them, so I added the images.

At dawn today, out in the street

possessed by a kind

I rummaged with a stick in the surreal world

I realized that things don’t die but are murdered.

of an unknown colour, strange and tortured metals,

that rejected life. My attention was caught by

a doll’s torso, with a dark stain,

a sort of rosy meadow death.

It seems that culture consists in

the thorough tormenting of matter

and pushing it through an implacable intestine.

Almost a comfort to reflect that not even this excrement

is obliged to abandon the planet. 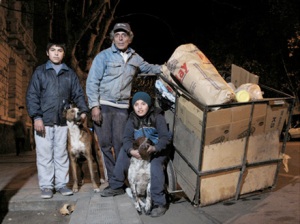 ← Stendhal and Borges
The Decapitated Counts →

2 Comments on “Cartoneros of Buenos Aires”