The Vagabond’s Breakfast: a perfect stocking filler (wash thoroughly after use) 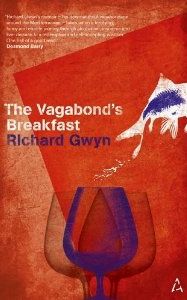 Thanks to Scott Pack for his mention of The Vagabond’s Breakfast and selecting it as runner-up in his top ten ‘Books of the Year.’

The fact that it (The Vagabond’s Breakfast) has been totally ignored by the mainstream literary press – it managed one review in the Morning Star – is bloody annoying but not all that surprising. I don’t think literary editors go looking for great books any more, they are content to wait for them to fall into their laps. Although they still miss them when that happens.

The VB also made it into the hallowed pages of Times Literary Supplement, featuring in its ‘Books of the Year’, as one of the choices of Patrick McGuinness, so perhaps I’d better quote that too:

Richard Gwyn began The Vagabond’s Breakfast while recovering from a liver transplant. A memoir of the nine years of drink, drugs and vagrancy that did for his first liver, it’s a jagged tale gracefully told. Full of humane surreality, there’s something whole, even holistic, about the brokenness of the life it pieces (back) together. Like many books about illness, it’s also about health: Gwyn is a citizen of both realms, describing life with “two passports.”

It is still not too late for you to buy a copy of The Vagabond’s Breakfast as a yuletide gift for your beloved or for a friend or deserving relative, through The Book Depository (£7.23 plus free worldwide delivery), Abebooks (various prices) or even Amazon (£6.99 plus free UK delivery).

Such shameless self-promotion would be scandalous were this not being written at arm’s length for me by my amigo, accomplice, intermediary and sometime translator, Señor Ricardo Blanco.

← Nicanor Parra at ninety-seven
Christopher Hitchens and the uncertainty principle →

5 Comments on “The Vagabond’s Breakfast: a perfect stocking filler (wash thoroughly after use)”