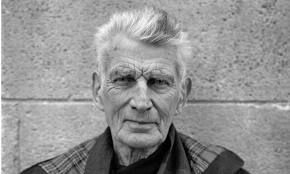 I am reading James Knowlson’s Damned to Fame: A Life of Samuel Beckett, which seems to be everything a literary biography should aspire to, and discover two passages that demand to be shared; the first of these is young Sam’s love of stones, which he would collect from the beach and bring home “in order to protect them from the wearing away of the waves or the vagaries of the weather. He would lay them gently into the branches of trees in the garden to keep them safe from harm. Later in life he came to rationalise this concern as the manifestation of an early fascination with the mineral, with things dying and decaying, with petrification. He linked this interest with Sigmund Freud’s view that human beings have a prebirth nostalgia to return to the mineral state.”

But never find Papa Sigmund, I am immediately reminded of the Greek poet Yannis Ritsos’ fascination with stones. Ritsos, who spent many years as a political prisoner, collected and painted stones throughout his life. According to a recent exhibition at the Museum of Cycladic Art:

The poet’s pictorial approach is evident in his solitary preoccupation with the natural contours of objects, such as roots, bones, and above all stones and pebbles, which are found in abundance in the arid islands of Greece, perhaps as a result of the universal “urge of expression against decay and loneliness”. Stones and pebbles: these were the materials that Yannis Ritsos used, the “plentiful raw material on which one could mark or underline by felt tip pen or Indian ink what the stone itself dictated”.

On the stones of Yannis Ritsos are depicted solitary figures or large groups of people, frontal, in conversation, or sensual couples – archaic figures enduring in time. It is as if these figures spring out of his poems in order to meet characters from myth . . . characters incessantly fusing with later ones, never ceasing to exist in collective memory. 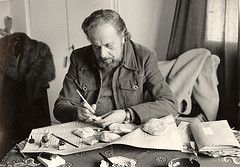 Back with Beckett – whose grandparents, I learn, were named Beckett and Robinson, as were mine on my mother’s side – I come across an extract from a letter by the publisher T.M Ragg at Routledge, which strikes me as an example of something you would never hear from a major publisher’s office nowadays.

Beckett’s novel Murphy was rejected by countless publishers on both sides of the Atlantic, Beckett “keeping a list, as reports came in, in his ‘Whoroscope’  notebook of the publishers whom he knew had rejected it. He almost lost count.” Eventually the book was recommended to Routledge by the painter-writer Jack B. Yeats, and one of the editors, Mr Ragg, read it in a single day while ill with gastric flu. All the miseries of his complaint were forgotten in his enthusiasm, he wrote, in his letter to Yeats, and he added:

I want to publish it, and I am seeing Reavey (Beckett’s agent) tomorrow to talk the matter over with him. I am afraid there is no doubt it is far too good to be a big popular or commercial success. On the other hand it, like your own book, will bring great joy to the few. Thank you very much for introducing it to me.

When I read that I had a brief fantasy of ever receiving such a letter from a major publisher in this day and age. Absolutely unthinkable. Imagine Random House or HarperCollins employing the loony criterion of ‘bringing great joy to the few’.

So thank the stars there are still small publishers like CB Editions, who produce lovely books for discerning readers, on precisely the criterion employed by Mr Ragg when he published Beckett’s Murphy. Their list may be small, but the range and quality of the books they produce is never less than excellent.

3 Comments on “Beckett, Ritsos and stones”