In a lonely house deep in the Black Mountains of south Wales, a man spends insomniac nights absorbed in the ancient texts left him by his mysterious aunt. When a blue tent appears in the field at the end of his garden, his solitary life is turned inside out.

But who owns the tent?

And when the tent’s occupants emerge, whose story are they telling? As his life unravels, the man begins to question whether he is the orchestrator or the victim of his own experiences. Are the stories that guide or steer his life – any life – real, or merely the echo of other, possible lives?

‘A mysterious, dream-like story, delicately-written and with a disturbing undertow, The Blue Tent is in the best tradition of modern oneiric fiction’              Patrick McGuinness

The Blue Tent is also available in French as Les invités, superbly translated by Céline Leroy.

“One of the most satisfying, engrossing and perfectly realised novels of the year.” Western Mail

“The Blue Tent is a portal to a magical Wales.” Nation Cymru

“The Blue Tent continues to frustrate and ensnare long after it is set down, its haze of possibilities proving for compulsive re-reading.”  Wales Arts Review

An interview with Wales Arts Review Book Club can be found here: https://www.walesartsreview.org/book-club-interview-richard-gwyn/

An interview for The Western Mail can be found on Ricardo Blanco’s Blog here . This text formed the basis for an article about the book which appeared in the Saturday edition of that newspaper on 13 July, 2019.

The Blue Tent  is also available in a French version, superbly translated by Céline Leroy and published by Losfeld/Gallimard. You can order it directly from the publisher here. 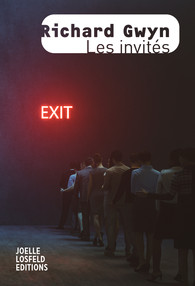 It is 1981 and while Britain enjoys the full impact of Thatcherism, Cosmo Flute, a brilliant and dissolute young painter, and his friend Ruben Fortuna, a street-wise Argentinian photographer, flee to the Greek island of Crete to indulge in alternating spells of painting, drinking, and some really Deep Hanging Out. Much of their leisure time is spent in local bistro The Unspeakable, where waiter Igbar Zoff serves squid, pig’s testicles and dodgy wine to the local loafers, and sows confusion in the minds of unsuspecting customers with his improbable tales. Events turn serious when Cosmo and Ruben accidentally witness secret US military activity on the island and are drawn into a shadowy world of espionage and counter-espionage. When Cosmo becomes involved with a young woman who carries an explosive secret, the fallout will propel Cosmo and Ruben through the death throes of the Cold War, and Crete’s bloody history of sacrifice and betrayal, to a stunning climax amid the running of the bulls in Pamplona.

‘Gwyn captures the languid confidence of youth, privilege and artistic ambition playing out in the sunshine, and this inevitably brings to mind Alan Hollinghurst’s Line of Beauty. Meanwhile, the adventures have something of John Fowles’ classic The Magus about them.’      Alex Hemingsley, The London Paper.

To order Deep Hanging Out from amazon.co.uk, click here.

Set in the bohemian under-belly of Barcelona, this novel weaves between an urban thriller and a Gothic historical drama focusing on Catharism, a 13th-Century historical sect. Musician and translator Lucas has reformed his nomadic ways to settle in Barcelona’s Gothic Quarter. Intrigued by some cryptic instructions on the back of an anonymous postcards, Lucas finds himself thrown into a love affair with the sophisticated Nuria. But his attraction is obsessive and vulnerable in turns: can we trust this man’s version of the story?

The Colour of a Dog Running Away was published by Parthian in the UK, Penguin Random House in the USA, and has been translated into Spanish, Italian, Portuguese, Russian, Chinese, Turkish and Macedonian.

‘The best novel of the year.’ – Scott Pack, The Bookseller

‘Clever, stylish and supremely entertaining . . . this novel offers a feast of sophisticated pleasures and a taste of deeper passions too.’ Boyd Tonkin, The Independent.

‘An excellent read . . . cleverly written, dark and funny.’ The Scotsman.

‘At once an absurdist riddle, a romantic quest, and a love letter to our anti-hero’s chosen home, Gwyn’s witty and assured first novel is as much about the different ways you can tell a story as it is about the story itself.’    The New Yorker.

‘Full of good stuff . . . short measured sentences and dreamlike dialogue . . .Gwyn’s Barcelona is one of uncertainty and magic, filled with darkly comic characters both prophetic and pathetic. Every encounter and detail of city life, precisely and unhurriedly recorded, seems significant . . . ‘  Time Out

‘Gwyn leaves many of his mysteries veiled, while providing enough detail to avert readers from a head start. . . . Beautifully precise.’  Newsday

‘Gwyn’s fiction debut showcases sure-footed versatility and care with language, the poet’s fingerprints on every word.’    The Oregonian

‘This novel can only be deemed “gloriously unclassifiable.” With a sumptuous Barcelona setting, ruminations on the nature of identity, a secret history, kidnapping, cults and unreliable storytelling, wrapped up in a prose style that packs at least 4 paragraphs into a single one, Gwyn’s debut is impossible to get out of your head and absolutely worth the time to read and unspool each new revelation. ‘   Sarah Weinman Confessions of an Idiosyncratic Mind

‘A wild but entertaining ride through historic Barcelona . . . The writing is delicious.’   Deseret Morning News

To order The Colour of a Dog Running Away from amazon.co.uk, click here.

To order The Color of a Dog Running Away in the USA, click here.