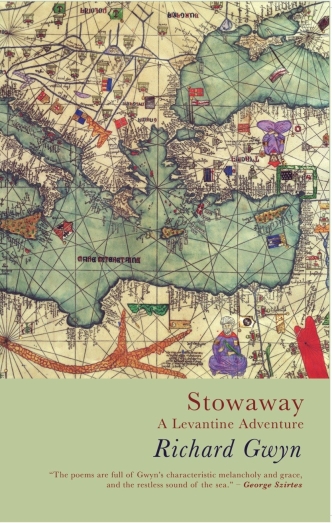 Richard’s most recent poetry collection is Stowaway: A Levantine Adventure, published by Seren on 31 October, 2018.

This collection, held together by a loosely-knit narrative around an unnamed protagonist, a kind of anti-Ulysses, is based on a number of journeys that the central character takes around the eastern Mediterranean; journeys that I myself might have taken. However the speaker in the poems – whether first or third person – seems to transcend historical time-zones and incorporates elements of the mythic, and even the magical, as well as actual historical phenomena, from the expulsion of the Jews from Spain in 1492 to the rise of Islamic State or Daesh.

‘Among the many types of love poetry – those of the affairs of the heart, or the passions of the intellect, or the poets’ long besottedness with language itself – there has always been a special place for the poetry of place itself, whether about our deep connection with where we believe we come from, or concerning those places to which we may not be native, but which nonetheless we cannot stop ourselves from returning to. We recognise such locations intimately, as though from prior lives, and, whether in person or in the imagination, we continually attempt the primary act of Greek epic: the nostos, or return.

Greek poetry has always been particularly sensitive to this obsessive engagement, and in the works of Seferis and Cavafy we find the themes of place revisited over and over again, whether in terms of the impossibility of departure, or of truly arriving. In Borges and Joyce we see the idea replayed as types of inner exile, or, as in the central theme of Richard Gwyn’s new book, of displaced belonging. Glimpses of autobiography, angles on history, and retellings of myth combine in layers in Stowaway – stratigraphies of the imagination experienced as depths like the waters between islands.

The Levant, as explored by Durrell, Pamuk, Dalrymple, and Leigh Fermor, is revisited in narrative verse and prose poems that echo and reflect all of them and none, suggesting that Gwyn has internalised and completely re-imagined these writers’ very various notions of a sort of Byzantium. A mosaic of first and third person viewpoints build into a metaphysical mapping of the territory and, more appropriately, the heptad of Eastern seascapes, from the Adriatic to the Ionian to the Cretan to the Aegean to the Marmara to the Levantine to the Libyan: a world in a corner of the Mediterranean.

Dionysian drunks, metaphysical Byzantines, rapacious Venetians, and daemonic deckhands crew these poems, and all certainties of chronology and safe haven are gradually washed away in the ceaseless storm of memory, epiphany, and invention that carries the reader like a hapless yet uniquely fortunate stowaway through the dangerous straits of these pages.’ – W.N. Herbert

‘The Stowaway of Richard Gwyn’s title moves through The Levant like a marine equivalent of some drifter on the high plains, seeking both terra firma and escape from it.  The poems are full of Gwyn’s characteristic melancholy and grace, and the restless sound of the sea.’ – George Szirtes