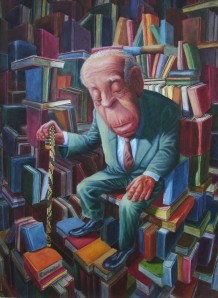 In Britain we tend to celebrate the anniversary of the births of famous people: in Argentina it is their deaths that are commemorated. Last month I was asked to contribute a piece for the Buenos Aires newspaper Clarín‘s special Borges supplement, looking at his influence on writers in the English-speaking world. It was published in Spanish on 14 June and is available here.

Here is the English version:

I first read Ficciones when I was eighteen years old and living in an abandoned shepherd’s hut half way up a mountain on the island of Crete. I had found the spot quite by chance while exploring an empty stretch of beach, and I moved in for the summer. I had just consumed The Brothers Karamazov and The Magic Mountain in rapid succession, and the brevity and intensity of Borges’ writing came as a revelation. Borges himself had something to say about big novels: “It is a laborious madness and an impoverishing one, the madness of composing vast books — setting out in five hundred pages an idea that can be perfectly related orally in five minutes. The better way to go about it is pretend that those books already exist, and offer a summary, a commentary on them.”

As an eighteen year old I was seduced by the idea that every instant contains the potential for an infinity of outcomes – a recurring motif in Borges’ work – or that our universe is only one in a multiplicity of possible universes, or that rather than being the proprietors of our own consciousness, we are being dreamed by some other entity. Not comfortable ideas to live with, but always pressing at the edges of comprehension, and always dissatisfied with received wisdoms.

Not everyone regarded Borges with such awe at the time, including the friend with whom I shared my idyll on the Libyan Sea. Over the next years I noted with curiosity whenever mention of Borges was made in relation to other writers. From the start, bearing in mind one of my favourite stories was ‘The South’, I always considered Borges to be a deeply Argentinian writer, and many of his stories are parables of Argentinian life. But I learned that there was also an ‘English’ Borges, not least because, due to the influence of his English grandmother, he grew up bilingual, and he reminds us in his cadences of the writers that influenced him; his beloved Stephenson, Kipling and Chesterton. It was perhaps this alleged ‘Englishness’ that appealed to some (although by no means all) of his fans in the UK. In any case, Borges cast a considerable influence over English language novelists of the 1980s, in particular, on both sides of the Atlantic, and the twenty-fifth anniversary of his death provides a suitable occasion to review that influence.

In his novel The Information (in which the twin protagonists, Richard and Gwyn, alarmingly constitute my own name), Martin Amis uses the concept of The Aleph – “a sphere whose centre is everywhere and whose circumference is nowhere . . . one of the points in space that contains all other points” – as a central trope to infuse the book with astronomical detail, particularly with respect to the life cycle of stars, and the sun. According to the critic James Diedrick, Borges’ influence on the book extends further, ‘The Circular Ruins’ providing an allegory of how all literary works derive from other works, thereby confirming Amis’ own debt to Borges.

In a discussion with Ian McEwan held in London to celebrate the centenary of Borges’ birth, Amis said “Borges’ genius leaves me speechless, his work should not be considered minimalist, but extravagant. His way of facing the horror in the eternal and the transitory is extraordinary.” McEwan, similarly, praised Borges’ “colossal intelligence”, adding: “There is something liberating in Borges’ writing; it is the pure pleasure of the game of literary abstraction.”

Salman Rusdhie has also confessed to Borges’ influence, and in an essay refers to always carrying with him several ‘passports’, one of which is Borges’ Ficciones. Furthermore, in the acknowledgements to The Satanic Verses, Rushdie cites Borges’ Book of Imaginary Beings for the description of the Manitcore.

However, in a 1999 review of the Collected Fictions, on their publication in English, Mavis Gallant observed that: “it is all but impossible to find anyone who has read Borges recently (other than Spanish-speaking readers, translators, specialists in Latin American writing and graduate students preparing dissertations).” Not much has changed since then. I suspect that many of the conceits and tropes that are considered ‘Borgesian’ have seeped into the fabric of British and American fiction, often without writers knowing from whence they came. Fantastical cultures, absurd hierarchies, ludic ploys and recurrent self-referentiality might remind some of us of their origin, but for many others they are just the way things are: they have been normalised within the rubric of post-modern fiction. Among younger writers in Britain, Borges would certainly seem to be far less of a force than he was at the time of his death, although his influence is discernible in the works of fine authors such as Geoff Dyer, David Mitchell and Zadie Smith. I teach at a British university and startlingly few of my own students have read him, though most have heard of him. Every year I endeavour to rectify their ignorance, and their reaction is either one of incomprehension or else an astonished and grateful: ‘why did no one tell me about this before!’ Among writer friends his name is still practically sacrosanct, though I am beginning to wonder how many of those under the age of forty have actually read him. Almost everyone agrees that only the stories from 1939-49 are truly great: the later work is found by J.M. Coetzee, for example, to be “tired” and to “add nothing to his stature.” The poems are sadly underappreciated here too compared with those of his contemporaries, Neruda and Lorca. But the great stories of the 1940s are perceived as his enduring strength, and as I suggested above, his influence has been absorbed into a way of seeing the world – just as Foucault intimated, almost by accident, over forty years ago.

My own favourite tribute to Borges comes in Thomas Pynchon’s Gravity’s Rainbow in which a group of Argentinian exiles, led by the adventurer Squalidozzi, and at large in Europe during World War Two, hijack a German submarine. Improbably, they are accompanied by the glamorous Graciela Imago Portales – a ‘particular friend’ of the Buenos Aires literati – to whom ‘Borges is said to have a dedicated a poem’. Two lines are cited: “El laberinto de tu incertidumbre / Me trama con la disquietante luna . . .” Of course, the quotation has puzzled scholars, as it is neatly consistent with the rhythms and motifs of Borges’ earlier work, and yet nowhere to be found in his oeuvre. It would no doubt have delighted Borges, the more so since Pynchon made it up.

← A New Dawn
Dionysus and The Doors →