The past deforms the present: ‘Eye Lake’ by Tristan Hughes 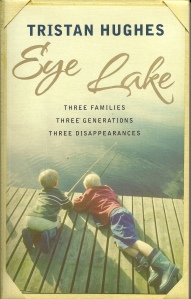 The first sentence of Tristan Hughes’ new novel goes like this: “ I was casting out from the eastern shore of Eye Lake, opposite the second island, when I snagged the top of my grandfather Clarence’s castle.”

Imagine the past is a lake. Then something happens, maybe the feeder river is diverted and the lake very slowly begins to empty. The past is being revealed, almost imperceptibly, with every inch that the lake recedes, but the people in the town by the lake are mostly either too blind or too absorbed in their tired, meaningless lives to notice, or to care. Something like this happens in Eye Lake.

What lies below the lake is of very great concern to Eli, the narrator of the story; Eli, whom everyone considers rather simple, and whose quiet, steadfast manner and gentle integration in the outdoors life of the northern woods renders him little more than a feature of the landscape to the other inhabitants of Crooked River (population 2851 and falling, the cover blurb informs us). As the story progresses we begin to ask ourselves whether Eli’s ‘simpleness’ is not rather a simplicity of vision, an unsullied quality of pure, unprejudiced observation. Eli sees things as they are, rather than in ways fashioned by prejudice or the moribund acceptance of received knowledge.

This book is about the presence of the past, and about absences – great rifts, in fact – within the present. There are three disappearances, and something – we are not told what, of course – connects them. The lake is drying up, and with it, the soul of the town. This invites a different reading of the past, in a last attempt to save the town’s soul. Tristan Hughes has said in an interview that “the past doesn’t just inform the present: it deforms it”, and he has admitted to being slightly obsessed by the notion, something with which readers of his previous three novels will probably concur. The Tower, Send My Cold Bones Home and Revenant are all set on Anglesey, the island off the coast of north Wales where Hughes grew into adulthood on his father’s farm, having spent his early childhood in North Ontario, in a place very similar to Crooked River. The landscapes of these two settings are remarkably different, but both possess a quality of removedness from any centralizing or ascendant point of view, both breed a sense of self-containment or detachment from the concerns of a cluttered, metropolitan perspective. But despite the space or scale that doesn’t necessarily mean it’s any easier to breathe the air there, or in these books, either. Each one of them is beautifully crafted; they flow with a sparse, melodic prose, evincing and yet just fighting shy of a sense of the epic. They contain fine, controlled writing, and a deceptively mellow yet insidiously menacing quality that is both arresting and disarming.

Hughes has cited as influences writers as diverse as William Faulkner, John Cowper Powys and Caradog Prichard, author of the Welsh-language classic One Moonlit Night. Such information is only partly helpful: there is a hint of the Gothic in Hughes’ writing, but it is never overt, far less overbearing. And, as another reviewer said of Send My Cold Bones Home, if Hughes is in the tradition of Powys, it is in the sense in which Malone Dies is in the tradition of Ulysses.

Someone said there are only two myths: the one in which the hero sets off on a journey, and the one where the hero stays at home. Hughes has commented that growing up on a small island instils both myths: its occupants seem torn more than ever between a desire for home and for elsewhere; of staying still or lighting out for the territories. The irony of a place like Crooked River – itself a sort of island – is that it was founded by a man who was lighting out for the territories but within a couple of generations had become a place in which its population is irrevocably trapped.

Do not read Eye Lake if you are looking for racy action or a lot of thrills. But if you value skilled, understated writing that worries its way below conscious thought, or are in the habit of waking up at four in the morning with a vague sense of having forgotten something crucial, this book might just be for you.

One Comment on “The past deforms the present: ‘Eye Lake’ by Tristan Hughes”