At four in the morning there is a noise of riotous celebration from the nearby square, but I cannot be bothered to make it to the balcony to discover its source. Then there is an hour or so of quiet before the deafening screech of birdsong that signals both the beginning and the end of daylight in the tropics. From the trees circling the park hundreds of birds dance, joust, leap and dive in a frenzied avian fiesta.

and many birds, including the black headed trogon (trogón cabecinegro, in Spanish) pictured here, 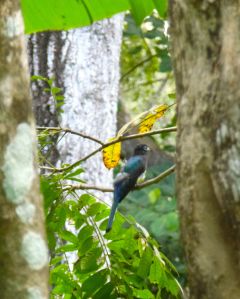 after visiting two coffee plantations, sampling their delicious brews, and witnessing a possum asleep in a bucket

Possum in a bucket

Our excellent guide José, and friends, at Mombacho

– and concluded with an interminable poetry reading, extremely mixed in quality, but beginning with a single (new) poem by Ernesto Cardenal on the sacking of the museum of Baghdad, and ending with Derek Walcott, again reading a single poem, Sea Grapes. Between these two octogenarian maestros – and with one or two exceptions – a number of distinctly indifferent poets went on for far too long, though I will refrain from mentioning the worst offenders.

Granada is an extraordinary festival, which is growing in importance and recognition, but which needs reining in and the exertion of greater balance in the selection of invited poets. This year, like last, I have met some wonderful individuals, made new friends, and learned a lot, but have also had to listen to far too much bad poetry. Fortunately, Walcott’s Sea Grapes does not fall into this category.

That sail which leans on light,
tired of islands,
a schooner beating up the Caribbean

for home, could be Odysseus,
home-bound on the Aegean;
that father and husband’s

longing, under gnarled sour grapes, is
like the adulterer hearing Nausicaa’s name
in every gull’s outcry.

This brings nobody peace. The ancient war
between obsession and responsibility
will never finish and has been the same

for the sea-wanderer or the one on shore
now wriggling on his sandals to walk home,
since Troy sighed its last flame,

and the blind giant’s boulder heaved the trough
from whose groundswell the great hexameters come
to the conclusions of exhausted surf.

The classics can console. But not enough.

Or you can listen to Walcott reading it here.

Of all countries of the world, there is a special place for those that have endured a suffering and a struggle for definition against powerful enemies both from within and without. Some of the struggles and mortifications that a people endure have become almost mythic and have come to stand as an example of human suffering that stretches beyond the countries concerned: they become, in a sense representative and definitive. Over the past couple of centuries there have been countless examples of the extremes of human conduct, in which small groups of people inflict their will on the majority. Nicaragua, although relatively small, must be counted among the most afflicted of countries in this respect. A series of dictatorships here have condemned the bulk of the population to obscene levels of poverty over generations, but less well known is the role played by influential foreigners. Few can compare in this respect with William Walker, the subject of an epic poem by Nicaragua’s great poet Ernesto Cardenal.

William Walker, the American son of a Scottish banker, exemplified a type of expansionist vision of what North Americans might make of their back yard, and he was evidently a scoundrel of the first order. He set out for Nicaragua in June 1855 with a small force of mercenaries and his plan was to colonise the country as a new slave state, to be settled by North American Anglos, who would own the land and the plantations, and import black slaves – who would do all the work. Eventually he planned to settle and colonise all of Central America as a slave-based empire to compensate for the abolitionist tendencies that were to drive the United States towards civil war a few years later.

His plans went well at first, his well-armed battalion of troops taking on the local army from Granada, which he made his base, before launching attacks into Leon and other regions. Walker declared himself president, invented a new flag for the country, confiscated all the lands owned by those who opposed him, made English the official language of business, and gained the recognition of the US government as head of an official state. His apparent invincibility came to an end when the Nicaraguans decided they’d had enough and rose up against him. After several bloody battles, he fled Granada by steam-boat, across Lake Nicaragua to the Caribbean, but not before his mercenaries had raped and massacred to their fill in a drunken killing spree,   and burned Granada to the ground.

According to the plaque, the church of San Francisco was re-built in 1867, twelve years after the filibuster (delightfully, filibustero in Spanish) William Walker left Nicaragua. He had another throw of the dice in Honduras, but was captured by a British naval officer, Captain Salmon, and handed over to the Honduran authorities, who had him shot, an action that was long overdue.

The banner photograph at the top of Blanco’s Blog was taken last year in Granada, Nicaragua at the VII International Festival of Poetry, towards the end of a rather hectic afternoon, on which misery and poverty were cast into Lake Nicaragua, encased in a coffin. Whether or not it worked I am yet to see, but am returning to Granada this weekend, with Mrs Blanco, so may find out. I doubt very much whether Daniel Ortega’s re-election as president will have secured the objectives aimed for by the coffin-carrying devils of last year, pictured here by the Scottish poet Brian Johnstone, but next Wednesday, apparently, Las Lágrimas del desamor or the ‘tears of indifference’ will be done away with and buried. We’ll see how that goes.

But to return to the photo on the blog’s banner, a couple of people have pointed out how the black-masked demon pops up behind the three amigos: he is easy to miss, as he seems an integral part of the background. This picture has haunted me for a long time, and I have practically no memory of taking it; everything was happening very quickly, and I certainly didn’t notice the reaper coming up on the left.

The Festival is held every February in the ancient city of Granada, supposedly the first to be built by the Spanish on the American mainland. Poets are invited from around the world: last year over fifty countries were represented by around a hundred poets.  My main interest is concerned with a project I have been working on for the past eighteen months: I am putting together an anthology of contemporary Latin American poetry.  This year, apart from the many poets from Latin America who will be attending, there are big names from the English-speaking world: Derek Walcott and Robert Pinsky (as well, of course, as my other Scottish compadre, Tom Pow).

Posted on February 9, 2012 by richardgwyn

Claribel Alegría, who was born in Nicaragua in 1924, but raised in El Salvador, beginning a life of exile that included Chile, Mexico, Paris and the island of Mallorca, is a poet heavily influenced by the revolutionary struggles of the Central American peoples against the dictatorships of the middle and later parts of the twentieth century. She was closely associated with the Sandinista movement in Nicaragua, and after the overthrow of the Somoza regime, she returned to that country in 1985 to help in the reconstruction process (which has since gone so badly wrong under successive, corrupt regimes, including that of Daniel Ortega). In her assessment of the poet, Marjorie Agosín has written of the ‘multifaceted work of Alegría, from her testimony to her verse . . . In this woman’s furious, fiery, tender and lovesick words, the marginalized, the indigenous recuperate spaces, resuscitate their dead, and celebrate life by defying death.’ While many of the early poems focus on the revolutionary conflict, Alegría has also written numerous love poems, as well as novels and children’s stories. As a feminist, writing of the marginalized lives of Central American women, her work has emphasized the restorative power of collectivity and continuity.

Towards the Jurassic Age

Someone brought them to Palma

they were the size of an iguana

and they lived off insects

The climate suited them

and they began to grow

they moved on from rats

more than an occasional donkey

children left to roam the streets.

All the drains were blocked

and they turned to the open country

they knocked down walls

that blocked the roads

but they jumped over the landslides

and now they are in Valldemossa

they killed the village doctor

and ran away to hide.

the latter have a kind of uniform

military caps that perch on their crests

but both sorts are dangerous

they wolf down plantations

and have fleas the size

they scratch themselves against the walls

and houses fall down.

Now they are in Valldemossa

and they can only be stopped

but no one can stand the stink

when one of them dies

and the people complain

and there’s no way

I am writing this letter on my birthday.

When I was a little girl,

I would wait for it impatiently

I would get dressed up in my best

and go on the street to tell the world.

I can still see it,

you playing chess with Grandfather.

At first your visits were infrequent;

began to lose its timbre.

And you would insist

and didn’t respect the humility

of his sweet nature

and of his shoes.

Afterwards you courted me.

I was just a teenager

and you with that face that doesn’t change.

You befriended my father

in order to get to me.

waiting for the end.

drifted around the furniture

And there was someone else,

you were signalling to him.

and paused for a moment to study me

I forbid you to return.

Every time I see you

I have loved another for years now

and your offerings don’t interest me.

Why do you always wait for me

in the mouth of sleep

Your greeting is a locked room.

I saw you the other day with the children

I recognised the suit:

the same tweed as back then

when I was a student

and you were a friend of my father’s.

I tell you again.

Don’t hang around any more

You will frighten the children

and the leaves will fall:

I have seen them.

What is this all about?

You are having a quick laugh

with that everlasting laughter

and you will keep on

trying to force a meeting with me.

all lost in your pupils.

Nothing will stop you winning.

I knew it at the start of my letter.

Translations from the Spanish by Richard Gwyn, first appeared in Poetry Wales, Vol. 46 No. 3 Winter 2010/11.

Posted on October 4, 2011 by richardgwyn 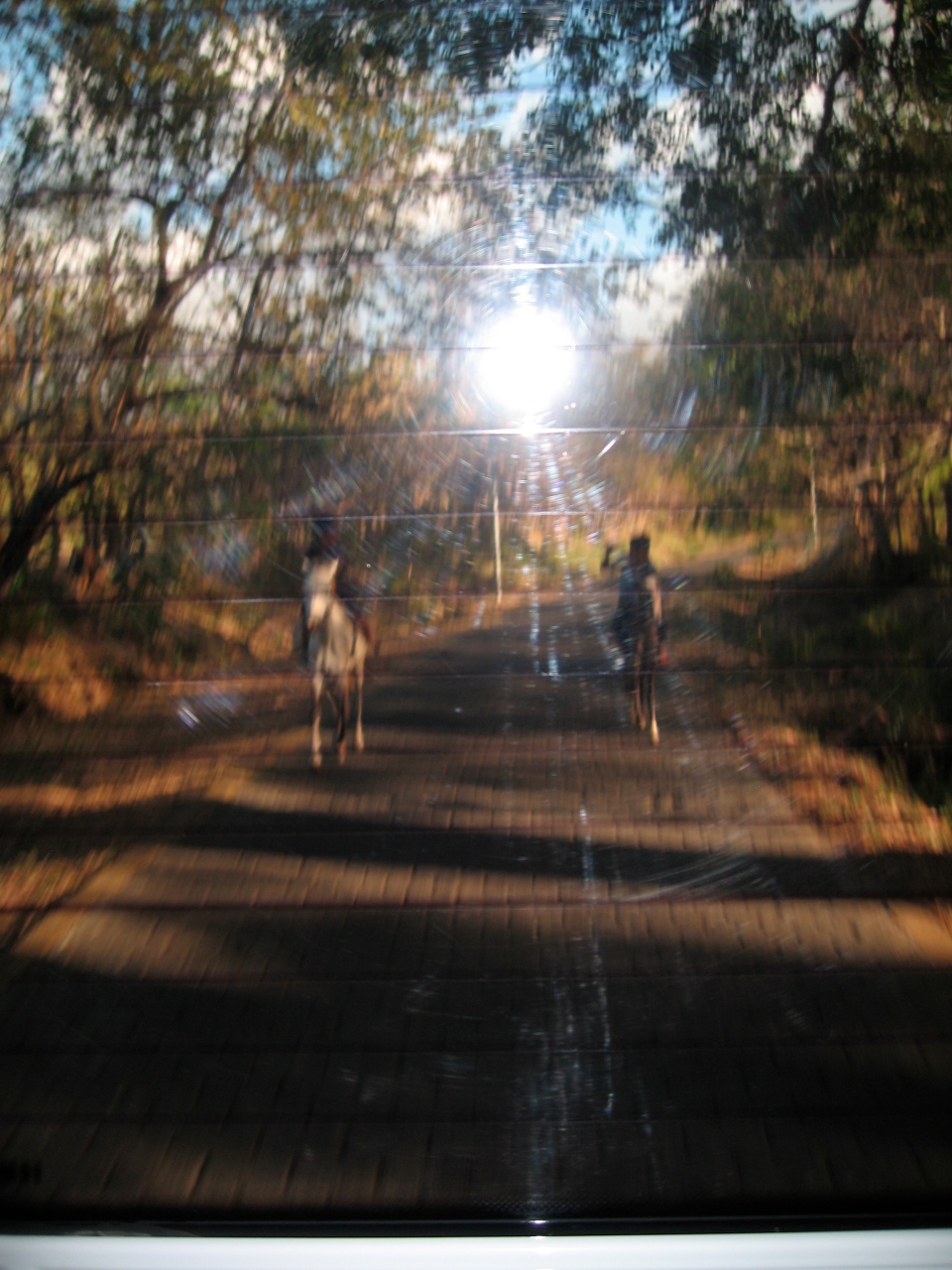 We had been delivered to the volcano, ascending through a tropics of livid growth, lush greenery, past the coffee plantations, up into the cloud forest; seen the salamanders and monstrous beetles and butterflies and the rare orchids, one of which, Mombachensis, is named after this mountain. Then the long drive down, and as we finally hit the flatlands, two boys, one around ten years old, the other younger, appear out of the bush on horseback. The boys ride bareback and are shoeless, and they are grinning and shouting and yahooing. Their exuberance is contagious even through the windows of the minibus. For a few seconds they are galloping alongside us, before the driver accelerates away. By the time I have my phone out they have fallen behind, and the young riders through the rear window are nothing more than shapes in the road, the sun behind them, the distance between us growing.