Fiction Fiesta started out three years ago as a conversation in a pub between myself and Nick Davidson, landlord of the now defunct Promised Land in Windsor Place, Cardiff. I was expecting a visit from two Argentinian writers, Andrés Neuman and Jorge Fondebrider, and Nick and I decided to hold a small celebration to welcome them to Wales. However, we got a little excited and ended up inviting all kinds of people, including the publishers Christopher MacLehose and Charles Boyle, and the literary editor of The Independent, Boyd Tonkin, and then a load of people from closer to home got involved. Nick got some money from the San Miguel brewery and I managed to secure some from Cardiff University and the thing was on. We followed up in 2013, with an Arts Council of Wales small festivals grant, inviting Eduardo Halfon from Guatemala and Inés Garland from Argentina to join several writers from Wales and elsewhere, and The Independent again covered the event, which attracted some attention.
My idea for Fiction Fiesta was simple: to team up writers in both the languages of Wales with writers from Latin America, and initiate a discourse between us and them, with the aim – among other things – of dismantling such notions as ‘us’ and ‘them’. The way we set out to approach this was to pay particular attention to literature in translation, and explore the whole idea of translation as a concept that to some degree governs our lives. After all, we are translating from the moment we are born: early childhood is the acute phase of translation, and of being translated. Those moments in which every gaze, every enraged instinct on the part of the infant meets with either incomprehension or else with a tentative, and then a more assured translation. As parents we are constantly engaged in acts of translation, as are friends and lovers and enemies and strangers of all variety. In literature, even without being translated into other languages, we are translating emotions and thoughts into words. ‘Reading poetry is itself a kind of translation,’ commented Andrés Neuman during a discussion at Fiction Fiesta in 2013. We are all translators, just as we are all, to some degree, writers.

The novelist and essayist Ali Smith, in her preface to English PEN’s report on literary translation, Taking Flight, wrote:  ‘If we value literature at all, we know the worth of literary translation. If we want language to be as subtle and supple and layered and resonant as language can be, we know the worth and the work and the subtlety of literary translation. If we care at all about looking beyond our back yard and our own dominant narratives, we know the worth, the work, the open border, open mind, open eyes and ears of literary translation. If we belong to a culture which rates the word literary, we know the value, the scope, the touchstone, the creativity, the generosity that exist in this fusion of literary and translation.’
Engaging with the literature of another country, another culture, enables us to understand not only the world as it is now, but also the shared history that brought us here, which will be our legacy.
As Edith Grossman, the modern translator of Cervantes’ Don Quixote puts it: ‘[Translation] permits us to savor the transformation of the foreign into the familiar and for a brief time to live outside our own skins, our own preconceptions and misconceptions. It expands and deepens our world, our consciousness, in countless, indescribable ways.’
It was never our intention to put on a big festival. We always wanted Fiction Fiesta to retain a sense of intimacy that came from holding the first edition of the fiesta in the upstairs room of a local pub. And we wanted to keep a sense of celebration, of literature as something to be savoured and enjoyed, like food and drink, which the large-scale corporate festivals cannot provide. Above all, we wanted Fiction Fiesta to help develop contacts and friendships between Welsh writers and writers from Latin America, which is where a lot of my own literary interests happen to have sprung from.
I was fortunate enough to spend some time in Mexico last year on an Arts Council of Wales project, and part of my task was to familiarise myself with the wide expanse of literary culture there as well as trying – within a month – to gauge as much as I could of the wider cultural climate within that country. I came away with my head filled to bursting, but enthusiastic about the task of developing closer relationships with individual Mexican writers, of translating the poems of some, and of reading the work of many others.
This year Mexico and the UK are teaming up for two big events: the London Book Fair, running this week from Tuesday to Thursday, where Mexico is the guest nation, and at the Guadalajara Book Fair, in November, where the UK is the invited country. We thought that Cardiff should see a slice of the action, so together with the newly formed Wales PEN Cymru, and with the support of the British Council, we decided to hold a small event here with two of the Mexican writers whose work I discovered last year, and who are visiting for the Book Fair. As is the usual pattern with FF, we teamed them up with local writers – or in this instance a Welsh writer and a Scottish Poet – to see what happens. 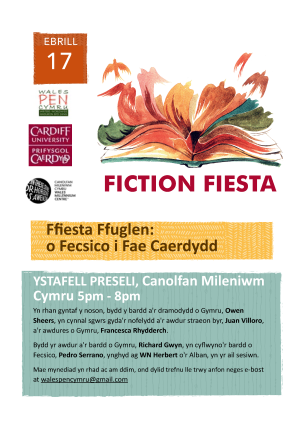 The event takes place on a Friday night, at the Wales Millennium Centre. In the first session, which begins at 5 pm, Owen Sheers will be in conversation with Juan Villoro, a contemporary and friend of Roberto Bolaño, and an extraordinary writer of short stories in the broad lineage of Borges, alongside Francesca Rhydderch, who achieved widespread recognition last November with her shortlisting for the BBC Short Story Award. In the second half, following a wine reception, I will be talking with Pedro Serrano along with the Scottish poet WN Herbert, and they will be reading from their work. The event takes place in the Preseli Room at WMC and entry is free of charge, with donations to Wales PEN Cymru welcome.
This year Fiction Fiesta is supported by the British Council and Cardiff University School of English, Communication and Philosophy.

This post also appears on the website of WALES ARTS REVIEW today. The new re-vamped Wales Arts Review serves as a media platform where a new generation of critics and arts lovers can meet to engage in a robust and inclusive discussion about books, theatre, film, music, the visual arts, politics, and the media.