Dance in the Rockies

L-E-V Dance Company is the creation of choreographer Sharon Eyal and co-director Gai Behar. The show they performed at the Banff Centre on Friday night is called OCD Love, a powerful and darkly compelling work. The piece was inspired, writes Sharon Eyal in the programme notes, by a text entitled ‘OCD’ by Neil Hilborn. ‘I couldn’t stop reading it’ she says, ‘for me it was already choreography.’

According to The Guardian review (a London performance was staged at Sadler’s Wells in 2016): ‘A female dancer appears to be the piece’s subject, and while she strives fearfully for autonomy, it becomes clear that she is animated by the five others, who form a shadow-corps around her. She can never escape them for long, and at times they wholly control her, physically manipulating her every move.’

It seems reductive to attempt a summary of a dance show that evades easy narrativisation, and which successfully elicits the whole spectrum of human emotion. In the closing minutes of the dance, as the group of dancers moves slowly away towards the back of the stage, I was transfixed by the backward gaze of the female protagonist as she, alone among them, kept looking back at us, the audience, until one of the male dancers took her face between his hands and pulled it towards his own, the action coming over as one of sublimated violence, which has been present – though by no means always sublimated –  throughout the piece. We know that there is something compelling her to look back, just as there always was, always will be; the object of her gaze might be ‘us’, the unseen others, it might be her own past, or something she simply forgot along the way. She wants to look back because that is what we do when returning from the underworld, but we, the unseen others in this drama, are not there; we, of all people, are nowhere. 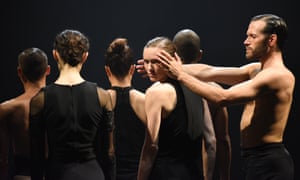 A joyful retort to the Greek debt crisis. Watch out for the Ottawa Zorba Sweepers at the end. What professionals!