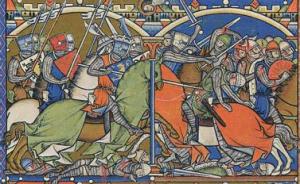 That night, their hired mercenaries left, but not without paying a visit to the Counts’ respective homes, ransacking their riches, raping their women, and slaying whoever crossed their paths. The peasant footsoldiers returned to their valleys and their farms. The Counts of Besalú and Olot, who had drunk too much wine the previous night, while entertaining themselves with the impalement of Vic’s mesenger, woke up to find the camp deserted. Even their servants had fled. A quantity of crows feasted on the remains of the messenger. The two counts contemplated their total dereliction. They decided to fight a duel, and whoever won, would seek refuge with the Count of Vic, blaming the other for the conspiracy. They set about each other with long-handled axes and, in the way of these things, managed to decapitate each other at precisely the same instant. Their two heads rolled a small distance and then came to rest, noses practically touching. Miraculously, the heads could still speak. “You know what?” said Besalú. “I never liked you anyway. It would have come down to this sooner or later, even if we had taken Vic.” “Precisely”, replied Olot, who was rather dim-witted. “In fact we’ve saved ourselves a lot of trouble, by getting this part over with first.” The Count of Besalú’s head rolled its eyes.

Later that morning, the two heads were found by scouts of the Count of Vic. They were still arguing. The soldiers stuck them on poles and displayed them in the town square, one at either end, so as to avoid having to listen to their interminable dispute.