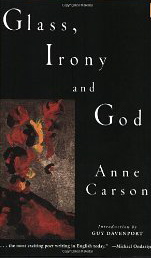 This morning, with the first light, I read Anne Carson’s long poem The Glass Essay, 38 pages and not a word wasted. Now every line feels engraved in my consciousness. What a rare occurrence this is. I sit up in bed, propped by a few cushions. Bed is a euphemism. We haven’t got around to buying a bed, in seven years. A mattress on the wooden boards, and a view across red rooftops to the bell-tower of the church. Early swallows skimming and diving. From time to time, while reading, I drift off, and occasionally it happens that I dream the words I have been reading, only to waken and find they are not the words on the page at all, but my own. So, reading Carson’s poetic discourse on Emily Brontë I drift into a dream where I am at the northernmost point of the north of a northern territory. Then I wake and continue to read. That way, reading is even more than usually a kind of collaborative experience.

I used to write quite a lot of poetry, but these days I find that the effort it takes to ‘make verse’ – as though straining towards a truth more profound or more lasting than the truth of prose – is not necessarily justified, or justifiable. By whom do I mean justified? By what measure justifiable? I do not know, I really don’t. But, mainly, I write prose.

And then how good it feels, and how rare, to sink into and absorb a poem as fine as this one. There are three themes to it: the 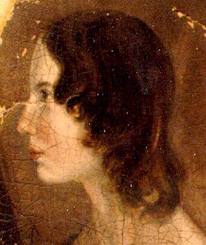 aftermath of a love affair between the narrator and a man she calls Law (he has his echo in her therapist, a woman called Dr Haw), a theme which constitutes the near past. Then there is an account of the life of Emily Brontë, author of Wuthering Heights (the distant past). Finally, the poem is cast in a present tense in which the poet (or narrator) is paying an extended visit to her mother, who lives on a moor in ‘the north’. The majesty of the poem is the way in which Carson threads the three narratives in and around one another, guilefully working each one so as best to extract the full flavour of the other two. There is such skill (and yes, it does appear effortless, which means it was hard-earned) in the composition of the poem. I stand in awe of this writing. To give some impression of the quality, here are three short passages from a single page:

‘When I was young

there were degrees of certainty.

I could say, Yes I know that I have two hands.

‘It is stunning, it is a moment like no other,

when one’s lover comes in and says I do not love you anymore.

I switch off the lamp and lie on my back.’

‘Emily had a relationship on this level with someone she calls Thou.

She describes Thou as awake like herself all night

and full of strange power.’

Earlier in the poem she writes:

‘I have never liked lying in bed in the morning.

moving along the moor

into the first blue currents and cold navigation of everything awake.’

I too like to be awake at first light, but some days it is good to lie in with it, and read poetry as good as Carson’s.

‘The Glass Essay’ appears in Glass, Irony and God, published by New Directions (1995).

2 Comments on “The Glass Essay”