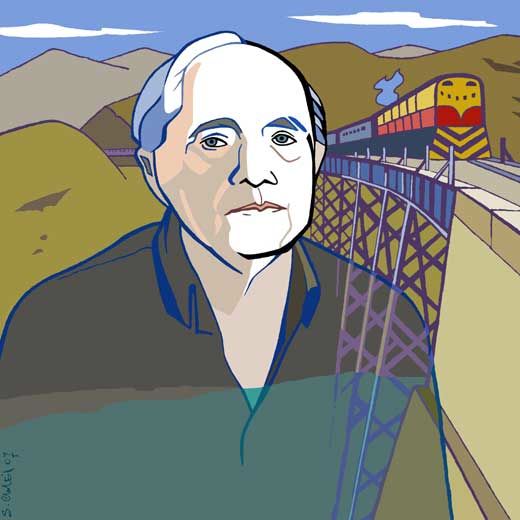 Illustration of Giannuzzi by Soledad Calés

Having written about illness in various media over recent years – principally as a so-called academic and the writer of a memoir, The Vagabond’s Breakfast, I am alert to the ways that other writers approach the subject, and am usually interested in what they have to say (so long as their writing does not launch into tedious new-age rage at the incompetence of ‘Western’ medicine, or degrade itself by spurious claims to the kind of quackery familiar to devotees of certain ‘wellness’ manuals).

I have recently been translating the poetry of the Argentinian Joaquín O. Giannuzzi, whose work is sadly neglected in the English-speaking world, and discover that illness – while by no means a limitation – is a recurring theme in his poems. This is something that is hard to do without falling prey to over-familiar tropes and accusations of self-pity. He approaches the topic as he approaches all his subject matter, with a lugubrious humour, with pathos, and with painful accuracy. I am posting three of his poems to mark my departure for his homeland later today. The original Spanish (which I have not reproduced here) is from the Poesía Completa, edited by Jorge Fondebrider, and published by Sibilina (Seville).

I smoked, I drank

and faithful to my personal rhetoric

put my feet on the table.

Fifty years old with the certainty of the damned.

without making too much noise;

yawning at nightfall I muttered my disappointment,

and spat on my shadow before going to bed.

that claimed from me a character that possibly

Or maybe something else is at stake. Perhaps

there was a different plan for me

in some potential lottery

and my number was lost.

Perhaps no one settles on a strictly private destiny.

Perhaps the tide of history settles it for one and all.

This much remains to me:

a fragment of life that tired me out in advance,

a poem paralyzed halfway towards

dregs of coffee in the cup

that for some reason

I never dared drain to the last drop.

On the Other Side

Someone has died on the other side of the wall.

At intervals there is a voice, hemmed in by sobbing.

I am the nearest neighbour and I feel

In the rest of the building

no one seems to have noticed. They talk,

they laugh, they switch on televisions, they devour

every last scrap of meat and every song. If they knew

what had happened so close by, the thought

of death wouldn’t be sufficient

to alter the cardiac rhythm of the

They would push the deceased into the future

and their indifference would have its logic:

after all, no one dies any more than anyone else.

In the bed opposite

the man woke up snoring

The serum was dripping

into his veins. From my belly

in which a pink foam bubbled

as if it were the definitive language

of my entrails. To one side

the last of his viscera.

behind the window’s glass

flaunting the life owed us

in exchange for the disorders

that laid waste to our pale bones.

and the opportunities offered to death.

In the corridor a nurse fluttered by

and we followed her with eyes intent on

of our clinical notes:

but we didn’t manage to reach

her distant and weary heart.

Posted on September 8, 2011 by richardgwyn

← The riots: an afterword
We don’t want your semen here thank you →