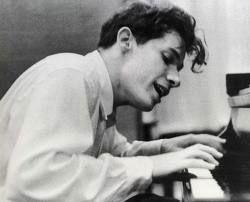 I have two recordings of Glenn Gould playing Bach’s Goldberg Variations on the piano. The first was made in 1955, the year before I was born, and the second in 1981, shortly before the pianist’s death, the same year that I left London and went to live in Crete. The second version is quite different from the first, and lasts several minutes longer. I think of the earlier recording as a day-time piece, and the second as nocturnal. They are both sublime, but in the first Gould is the young concert pianist on a mission, and he dazzles with his technical brilliance, his impeccable sense of timing. By the time he made the later recording he had nothing to prove, he had achieved everything a virtuoso pianist might reasonably be expected to achieve and more, and while there is no trace of complacency to the playing, it exudes a certain detached or entranced quality. Possibly the second version is more exacting, more profound, he lingers over the notes of the first variation with a confidence that is not to be confused with arrogance, a confidence that conveys a total acquaintance with, and mastery of, the music, a familiarity with every phrase, every musical innuendo, the fruit of years of study, and he is able to hover, and to hoist the listener into a space above and beyond the music, to linger there in a state of wonder, a phrase the pianist himself made use of. The album notes carry a quote from Gould: “The purpose of art is not the release of a momentary ejection of adrenalin but rather the gradual, lifelong construction of a state of wonder and serenity.”

There are two photographs of the artist, taken in the respective years the recordings were made. In the first he is young, quite handsome even, or dashing, his hair flopping over his eyes, while in the later photo his hair has thinned and he is wearing glasses. In both pictures his concentration is almost palpable, and in both his mouth is open, not significantly, not gawping, but open, as though he was concentrating so hard that he had forgotten to close it, or had opened it to say something, and forgotten his lines – or to groan (his recordings are marked by these occasional groans, which should be disturbing, but are not).

Glenn Gould’s recordings of Bach keep me company for long hours, while I sit at my desk. He is a faultless companion, especially when I am struggling to impose order on my thoughts. I would like to catch some of the fallout from his playing, inform my own thought with some of that rigour, that clarity of intent, employ his music as a force-field against the fatigue that overtakes me as I type away, as a weapon against the viral dance, against the affliction of sleeplessness, in an inverse sense to the one in which they were first intended: for, ironically, Bach is supposed to have written the Goldberg Variations around 1741 to ease his patron, Count Keyserling’s nights of insomnia.

From The Vagabond’s Breakfast pp 133-4

Posted on November 9, 2011 by richardgwyn

← Beethoven and all that jazz
The forlorn penis of Michel Houellebecq →