The mosaics of Torcello

In an essay by Kathleen Raine on ‘Yeats’ Holy City of Byzantium’, there is a quotation from A Vision in which Yeats speaks of mosaicists as being at the heart of a community of philosophers and craftspeople and painters:

‘I think if I could be given a month of Antiquity and leave to spend it where I chose, I would spend it in Byzantium a little before Justinian opened St Sophia and closed the Academy of Plato. I think I could find in some little wine-shop some philosopher worker in mosaic who could answer all my questions, the supernatural descending nearer to him than to Plotinus even  . . . . I think that in early Byzantium, maybe never before or since in recorded history, religious aesthetic and practical life were one, the architect and artificers – though not, it may be, poets, for language had been the instrument of controversy and must have grown abstract – spoke to the multitude and the few alike. The painter, the mosaic-worker, the worker in gold and silver, the illuminator of sacred books, were almost impersonal, almost perhaps without the consciousness of individual design, absorbed in their subject matter and that the vision of a whole people.’

Kathleen Raine, in her essay, suggests that the dome of the old Aghia Sophia in Constantinople ‘would have been inlaid with those mosaic figures who seem to stand in an optical space outside, not behind, the surface on which they gleam’. Of course, the mosaics of Aghia Sophia are gone now, and Constantinople is – and has been since 1453 – Istanbul. But I am wondering whether the mosaics of Santa Maria Assunta in Torcello, Venice, which I visited last month, don’t have that same quality of occupying a space beyond their immediately visible surface. The effect of these images, which we observed for only ten or fifteen minutes on a quick visit to the island, was dramatic and lasting. My own photos were not very good, so I have downloaded some that I found on the Italian Ways website.

We had taken a boat tour of three islands (Murano, Burano and Torcello), but I was only really interested in Torcello, which was the first of the islands in the Venetian lagoon to be occupied, in the sixth century or so. It was – and is – an island of low lying marshland, but it grew to sustain a population of around 20,000 between the 7th – 11th centuries, when its inhabitants started moving to the island that constitutes modern Venice, almost certainly as the result of a malaria epidemic. The island became depopulated, its buildings raided for materials and stone to be rebuilt in the new place. All of its great buildings and palaces have utterly vanished, and its population now is around 75. Only a few buildings and two churches remain, one of which is the Assunta.

View of Torcello with the Basilica of the Assunta in foreground

We walked along the bank of the single canal that divides the island as far as the church and then returned straight back to our waiting launch. It was a cold and rather bleak winter’s afternoon. I cannot remember there being any birds, though I imagine there must have been. Once inside the church, I felt an immediate sense of familiarity with the place – one of those rare sensory responses that you cannot quite identify, and which afterwards strike you as carrying a message you cannot decipher. Something like déjà vu, but not exactly. Afterwards it occurred to me that perhaps I visited with my parents as a young child; I cannot remember (and doubt whether my siblings will either, and both my parents are dead) but I had a strong sense that I had been there before.

Thinking back to the basilica of Santa Maria Assunta in Torcello, reflecting on the mosaics we found there . . . and reading the essay by Kathleen Raine on Yeats’ ‘Holy City of Byzantium’ I am reminded of the way the mosaic makers of Byzantium, and early Venice, were philosopher-craftsmen or women – and the mosaic makers’ art was something assimilative, in the sense that mosaic synthesizes from the world and makes concrete, fixes in time ideas and emotions and colours and pieces of stone and ceramic and other shapes from the material world, creating something shapely and beautiful and somehow, at the same time, apart, looking in on us as though ‘outside, not behind the surface on which they gleam . . .’ 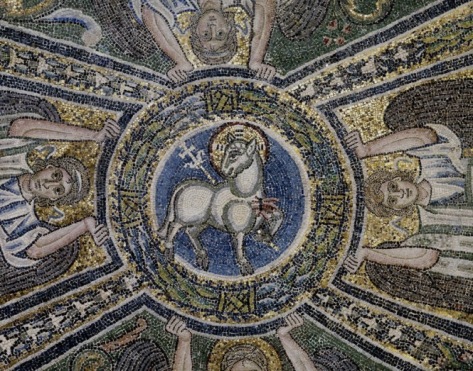 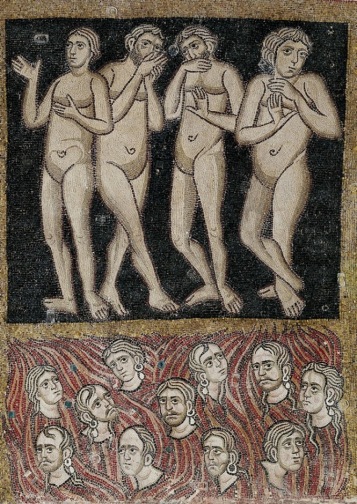 Posted on February 4, 2018 by richardgwyn

3 Comments on “The mosaics of Torcello”