I set out on a journey 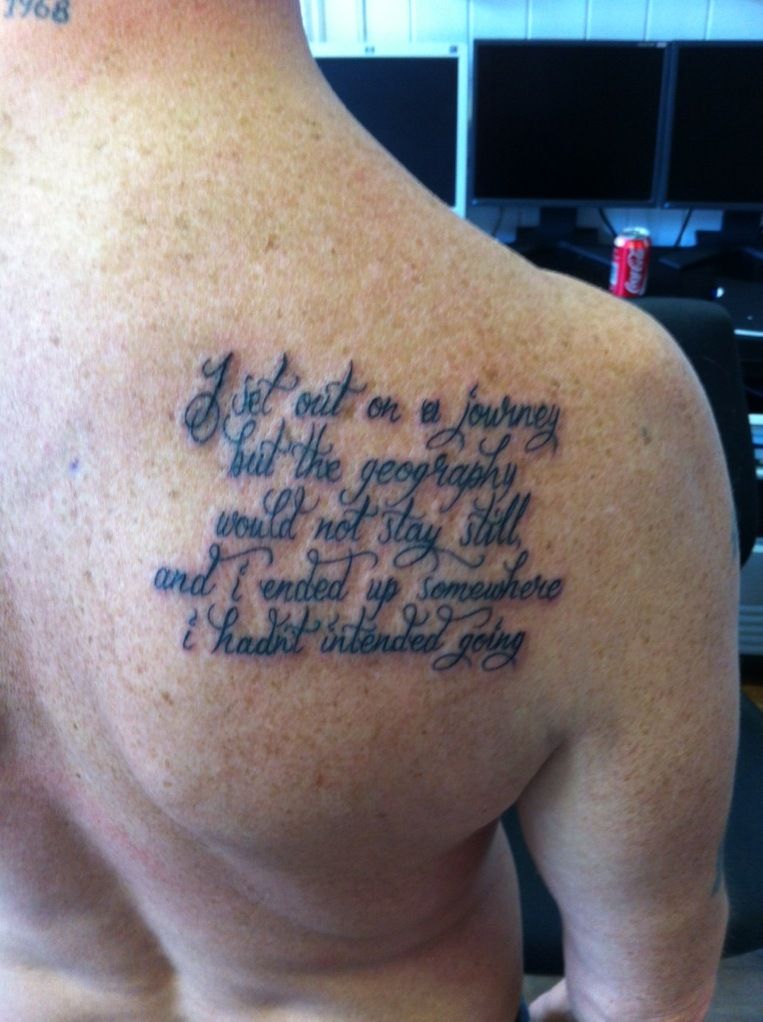 Imagine my surprise (horror/fascination/wonder) on receiving a photo on my iphone a couple of months ago, displaying the shoulder of a regular at The Promised Land (a charming fellow and good acquaintance: I do not know him well enough to claim him as a friend) who had had tattooed upon himself a short poem of mine, in its entirety. The poem is called ‘Restless Geography’, and, in case it is difficult to make out the words in the picture, it goes like this:

I set out on a journey, but the geography would not

stay still, and I ended up somewhere I hadn’t intended

I wanted to use this as the title of a collection of prose poems, but the publishers said it was too long, and I would have to cut it down, which I didn’t want to do. So we called the book Sad Giraffe Café instead.

The night before last, the house having being borrowed by daughters, who were entertaining friends, I put down the book of poems I was reading, and Mrs Blanco and I set off under Scary Bridge, and across the road into the Vue cinema and fitness complex. The long haul up the escalators presented a panorama of the huge gym on the first floor. The place was almost empty, just a few Wednesday night loners pumping iron and a solitary immobile cyclist. All three of them were young men. There was something tragic in this display of righteous pumping and pedalling in the perennial pursuit for a well-toned physique and bulging biceps under the blinding glare of strip-lighting. All I could see, as we glided past them on our upward journey, was a dreadful torpor. All I could see – as Beckett might have said, actually did say – was ashes. This set the tone for the rest of the evening. The chatty girl in the empty ticket hall (a dozen cinemas, no visible customers) told us we were the only people to have bought tickets for Seven Psychopaths, the new film by Martin McDonagh, and starring Colin Farrell, Woody Harrelson, Sam Rockwell, Christopher Walken and Tom Waits (pictured, here, in an empty cinema). 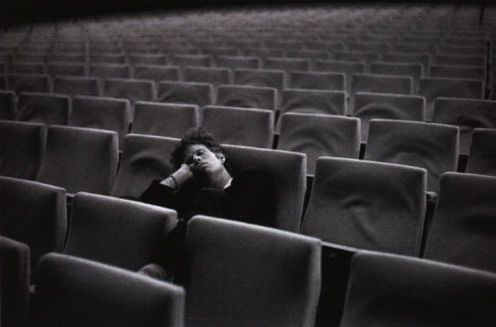 So Mrs Blanco and I chose our seats, two thirds of the way back, next to the aisle, and had the place to ourselves. This is a strange sensation. A private viewing in a full-size cinema. The seats are very comfortable at Vue, and there is plenty of space, but even so it is a luxury to lounge in abandoned fashion, and lounge we did. It is a pleasure to be able to loudly curse the fools who populate the ads and the trailers, as practically every film that Hollywood chucks at places like the Vue franchise are complete tripe. Trivial meaningless drivel circling around a half dozen well-worn and clichéd themes, all of them dire and depressing.

But the empty cinema inspires melancholy, rather than depression. The film is entertaining, even if it adheres to many of the post-modern meta-fictional tropes made fashionable by Tarantino. Nevertheless it made me laugh like a loon, which is never a bad thing. Laughed myself almost into a stupor at various points in the movie, in fact.

We came home around midnight, and the party was breaking up. The young were setting off for Clwb Ifor Bach or some other Cardiff nightspot.

Earlier in the evening, when I had been reading through the Selected Poems of Roger Garfitt, two short lines from his poem ‘The Journey’ had stood out:

I had to go on

And I realised these lines evoked the precise emotion that had (paradoxically) accompanied me earlier that evening, as I passed the young men pumping iron in the empty gym, on our way up the escalator to the empty cinema. I realised also that if I had not been accompanied by Mrs Blanco, my evening would have been unutterably desolate and solitary (in a bad way). Company helps divert us, temporarily, from our essential and terrifying aloneness, allows us to go on, even if ‘without oneself’, who is unaccountably absent, then at least sharing the emptiness with a warm and sentient human partner.

Afterwards, I lay awake, and the words of Garfitt’s poem stayed with me long into the night.

← What reality, where?
Noblesse oblige, my arse →

One Comment on “I set out on a journey”