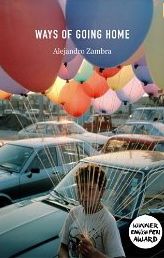 Alejandro Zambra’s first novel, Bonsai, won awards and brought the young Chilean poet international fame.  Bonsai is an elegantly-turned story which can be read in an hour, but is hardly, as some claimed on its publication, a classic destined to revitalize Chilean literature. It was followed by The Private Lives of Trees, which received comparatively less favourable reviews, but retained international interest in the author.

In this, his third and longest – but still very short – novel, translated by Megan McDowell, Zambra uses the ploy of describing the author at work on his new book, which, needless to say, is the one we are reading. Zambra adopted similar metafictional devices in its two predecessors and has evidently decided to stick to the formula.

As in his previous works, the new novel – strictly speaking a novella – evokes a wry and somewhat precious romanticism reminiscent of Murukami, with the central love affair subject to the corrosive influences of memory. But in Zambra’s world, this theme alone does not stand up to sustained scrutiny, and he shifts between the narrative present and revisiting the circumstances of a comfortable upbringing during difficult times. The most powerful passage concerns a meeting with his parents around the time of the 2010 Chilean elections, when the narrator’s father comes out with the line his son most dreads hearing: “Pinochet was a dictator and all that, he killed some people, but at least back then there was order.”

The most provocative idea in the book is the claim that the generation of Chileans born, like Zambra, in the years immediately following the coup of 1973, is composed of ‘secondary characters’. Our young hero suffers a vague sense of guilt at having been felicitously spared a personal legacy from those years of torture, disappearances and exile. And the narrator’s confounded utterance: “I’m the son of a family with no dead” is almost identical to one used by the protagonist of his previous novel, The Private Lives of Trees.

But Zambra’s narrator seems muddled as to what precisely his generation’s anomie actually involves: at one point he describes his peer group as:

“deserters, I think. We’ve become war correspondents, tourists. That’s what we are, I think: tourists who arrive with their backpacks, their cameras, and their notebooks.”

This leaves the reader wondering, well, which are you exactly: a deserter, a war correspondent or a tourist? There is a hell of a difference between the three, and the author’s unwillingness to differentiate indicates either laziness or a worrying lack of interest in his own thesis.

Zambra at his best offers an intimate recognition of his central characters, and he can evoke a setting with succinct brevity. He is a writer who works confidently from within his preferred metafictional formula, but we cannot escape the conclusion that Ways of Going Home is overly self-referential, and lacking in real depth or acuity. It is a readable but ultimately frustrating story aimed, like Bonsai, at a young adult market.

This review first appeared in The Independent on Tuesday, 29th January 2013.

← Adam Thorpe and WG Sebald on Flaubert, time and sand
On Not Getting It →