A Greek taverna filled with maps

What is a map, other than the unfolding and laying out of the territory — more accurately, a representation of the territory — through which a person may wish to travel? Rather than indicating merely a physical space or geography, maps always seemed to me to offer a way of thinking, a blueprint for what might happen. Maps spoke of the unknown regions of the mind, of alterity and doomed voyages, of treasure that lay hidden away in creased parchment. Robert Louis Stevenson, in writing of the origins of his Treasure Island, encourages the reader to ‘admire the finger of predestination’ and, after offering that curious directive, continues:

I made the map of an island; it was elaborately and (I thought) beautifully coloured; the shape of it took my fancy beyond expression; it contained harbours that pleased me like sonnets; and with the unconsciousness of the predestined, I ticketed my performance “Treasure Island.” I am told there are people who do not care for maps, and find it hard to believe . . . [A]s I pored upon my map of “Treasure Island,” the future characters of the book began to appear there visibly among imaginary woods; and their brown faces and bright weapons peeped out upon me from unexpected quarters, as they passed to and fro, fighting, and hunting treasure, on these few square inches of a flat projection. The next thing I knew, I had some paper before me and was writing out a list of chapters.

If such potential can be released through the making and contemplation of a simple map, hand-drawn and painted with ‘a shilling box of water colours’, how much unresolved wanderlust might be encompassed by an entire room, hall, or Greek taverna, filled with maps?

In Crete, the Lyrakia bar, which lay toward the eastern end of Hania’s old harbour, near the Venetian boat yards, was owned by Giorgos, who wore dark glasses because – as I was told – he had once accidentally or inadvertently caused someone’s death with his evil eye, and never wanted to be held responsible for such a thing again. The Lyrakia, now long gone, was large and square in shape, and the acoustics were, by chance rather than design, exceptionally good. Across the room, facing the long bar, the musicians would sit and play, usually just two of them, a Cretan lyra and an accompanying lauto or lute, often strummed by Giorgos himself, and in between lay a space for dancing which, as the evening progressed, would turn into a long, straggling affair, as drinkers pitched in and dancers snaked around the floor, the more accomplished taking turns to leap, often with astonishing grace, suspended — or so it seemed to me, though in reality it could barely have been for a second – in another dimension, during which their leaping was freeze-framed for eternity, returning as the explicit record, the recurring image, that my memory now associates with the name lyrakia, from the name of that instrument, the lyre; hence lyric, lyrical, etc., but not its homonym, liar, which is a pity, bearing in mind the logical paradox attributed to Epimenides the Cretan, who said that all Cretans were liars, but being a Cretan himself could not reliably be believed.

When temperatures and emotions were raised, fights occasionally erupted in the Lyrakia with the chaotic zeal of a saloon brawl in an old Western. Chairs became weapons and fists flew, and anyone unfortunate enough to be in the way was forced either to participate, or flee. But whatever the outcome of an evening spent drinking at the Lyrakia, whether it ended in dance or a free-for-all, I often felt as though I had entered a kind of dream warehouse, an emporium of almost infinite possibility, and for one reason in particular: the walls, stained, where visible, by decades of cigarette smoke, were plastered with maps, ancient and modern; maps left by bona fide tourists who had lost their way and ended up unaccountably at the Lyrakia (what could they have made of such a place?); stray hippies, equally adrift, navigating their way back from Afghanistan or India in a hashish stupor; Greek naval ratings (this was back in the day of mandatory three-year military service) readying themselves with ouzo before swaggering to the red-light district of the Splanzia, where I also lived. There were naval maps, charting sea channels (one, I recall, of the entrance to the River Plate) and German army maps from World War Two, decorated in Gothic script, and wholly ridiculous Greek maps, possibly designed to mislead the German occupiers, who, however, were seldom misled; maps in Latin script, Cyrillic script, Chinese, Arabic and Persian. Reproductions of the Catalan maps of Abraham and Jehuda Cresques, the Genoese World Map of 1457; Maps of Empire and of the end of Empire, Soviet maps and even, I noted, maps of the moon and of Mars. I once peered at a map of Europe designed for children, a different colour assigned to every country, and I traced with a finger the name for my own country: OYAΛIA. The unfamiliar lettering lent an alien aspect to the place, transforming it into somewhere foreign, which is strangely appropriate, since ‘Wales’ derives from the Anglo-Saxon word for foreigner. I am a foreigner by default.

In his book, Maps of the Imagination, Peter Turchi claims that ‘The first lie of a map—also the first lie of fiction—is that it is the truth.’ He goes on to consider the Mercator projection, through which the world was represented for four hundred years, and which most of us above a certain age instantly recognise, as it was the standard representation of the world used in classrooms across the world it depicted. ‘Despite its being used for centuries to teach schoolchildren geography,’ writes Turchi, ‘it is a particularly misleading projection for that purpose.’ 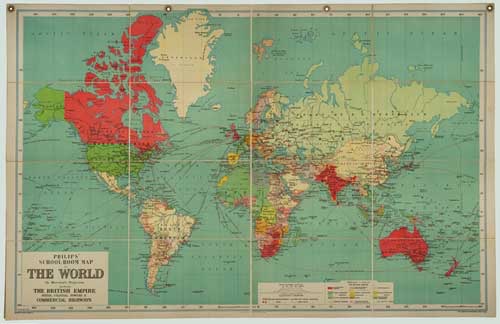 Gerardus Mercator, a German globemaker, devised his map in 1569, as a New and Improved Description of the Lands of the World, Adapted and Intended for the Use of Navigators. ’On Mercator’s map’, Turchi writes, ‘distortion increases as one moves farther from the equator (and the most important sailing routes of the sixteenth century) so that Greenland appears to be the size of South America—though in fact South America is nine times larger.’ Thus our view of the world changes according to the design or projection of the map we are looking at. There are, apparently, well over a hundred distinct cartographic projections in use today and each of them tells a slightly different story. In his radical deconstruction of the map, J.B. Harley questions the very basis of progress in the cartographer’s craft, as though, through the application of science, reality might be reproduced ever more effectively. Quite apart from the redundancy of progress as a guiding principle (in map making, as elsewhere) is that any representation of territory is somehow neutral: ‘Much of the power of the map’, Harley writes, ‘ . . . is that it operates behind a mask of a seemingly neutral science. It hides and denies its social dimensions at the same time as it legitimates.’ How strange that the representation of ‘reality’ — the earth we walk upon — should be subject to so many interpretations, so many versions; that ‘accuracy’ should be such a slippery concern.

The island of Crete, which has been mapped, with varying degrees of accuracy, since antiquity, is instantly recognizable, being long and thin, its span from east to west far exceeding its width from north to south. However, one of the earliest extant maps from the time of Venetian rule, by Cristoforo Buondelmonti (1420) displays the island standing on its head, as it were, which, since we are accustomed to representations of the island viewed horizontally from east to west – is at once disarming and strange, bringing to mind the form of Corsica, rather than Crete. 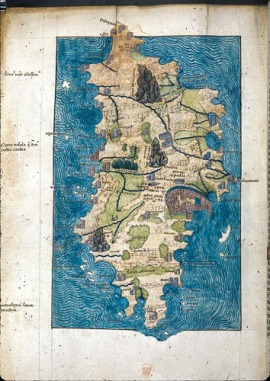 We might reasonably assume that a map is a means to an end, the end being an actual place we need to go. But another scholarly cartographer, Denis Wood, in his seminal study, The Power of Maps, writes that maps offer ‘a reality that exceeds our vision, our reach, the span of our days, a reality we achieve no other way. We are always mapping the invisible or the unattainable . . . the future or the past.’ Here, it would seem, the reader of maps is moving beyond the normal terrain of cartography, into the realm of the imagination and of dreams; in other words, into the realm of the writer. And that is precisely what the mapped walls (or the walls covered in maps) of the Lyrakia offered me: stuff to dream with, the raw materials of the writer.

It was in Crete that I first read Borges, another lover of maps, whose story ‘On Exactitude in Science’ I reproduce here in its entirety:

In that Empire, the Art of Cartography attained such Perfection that the map of a single Province occupied the entirety of a City, and the map of the Empire, the entirety of a Province. In time, those Unconscionable Maps no longer satisfied, and the Cartographers Guilds struck a Map of the Empire whose size was that of the Empire, and which coincided point for point with it. The following Generations, who were not so fond of the Study of Cartography as their Forebears had been, saw that that vast Map was Useless, and not without some Pitilessness was it, that they delivered it up to the Inclemencies of Sun and Winters. In the Deserts of the West, still today, there are Tattered Ruins of that Map, inhabited by Animals and Beggars; in all the Land there is no other Relic of the Disciplines of Geography.

Borges attributes these words to one Suárez Miranda, in his ‘Viajes de varones prudentes. The idea that those ‘Tattered Ruins’ of the map, ‘inhabited by Animals and Beggars’ are, indeed, the very fabric of the world we live in, and that the map has become the thing it was designed to represent, is a variation on the theme that obsessed Borges throughout his life, that of the other, the double, most famously expressed in his story ‘Borges and I’. In that piece – again a single paragraph – Borges reflects upon his dual identity as both a first person ‘I’ and as another, his own doppelgänger, a ‘name on a list of professors or in some biographical dictionary’, and acknowledges that little by little, he is giving over everything to this ever-present other. This pervasive sense of doubleness, of wandering through a labyrinth of mirrors, seems curiously apt in relation both to maps (which replicate a version of the world) and translation (which replicates a version of the word).

From Ambassador of Nowhere, a work in progress.

← Alchemy, alephs and insomnia: origins of The Blue Tent
Sculpting the Sky →

2 Comments on “A Greek taverna filled with maps”