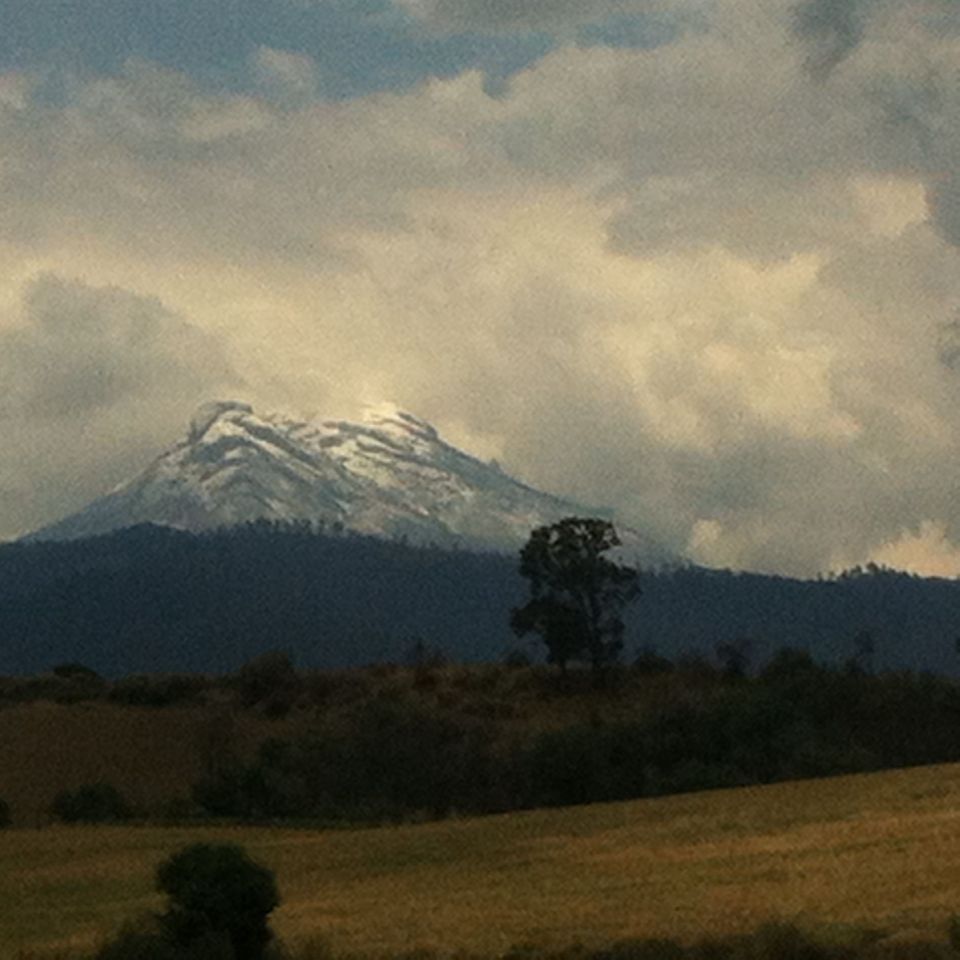 Yesterday I came back into Mexico City from Puebla, the massive form of Popocatépetl (5,426 metres) to my left – caught fuzzily on my phone camera – passing the misty woodlands and broad meadows that gather around its base. It impressed on me the extraordinary diversity of the Mexican landscape, that within a few hours one can pass through prairie, forest and the high sierra. The only constant is the truly terrible music being played full volume wherever you go, including on this bus.

On Monday night in Puebla, as I was walking back to my hotel, an indigenous woman, utterly bedraggled, with long grey hair and in filthy clothes came running past me, apparently chasing after a big 4×4, crying out, at volume and with some distress ‘Don Roberto, Don Roberto . . .’ She carried on at pace up the street (Don Robé . . . Don Robé . . . ) for an entire block, and I could see the vehicle turning at the next set of lights. When I got to the junction, she had stopped, and was resting, hands on knees, her crevassed face fallen into a kind of resigned torment. She seemed elderly, although poverty and struggle probably accounted for an additional twenty years. I can hardly imagine what her story was – or the cruel, uncaring Don Roberto’s – but it was timeless, and seemed to sum up, more than any social analysis, the discrepancy between want and privilege, the honorific ‘Don’, gasped out as her spindly legs carried her in desperate pursuit at once implying his status and her subjugation. The image has stayed with me.

I returned to the city yesterday evening to attend a tertulia, a cross between a poetry discussion group and a workshop organised by the poet and short story writer Fabio Morábito and friends, where I was invited to read. Afterwards I visited the barrio of Mixcoac with Pedro Serrano and Carlos López Beltrán, passing by Octavio Paz’s family home, before returning to the more familiar confines of Condesa and supper at Luigi’s.

But today, back on the bus, the perennial Mexican bus. The clock at the front says 7.05. It is 12.50, but who cares? We pass through the sprawling shanty outskirts of southern Mexico City and back into the mist. Daily travel awakens in the traveller a kind of constant dislocation, which is not surprising considering the word means just that – a state of being displaced, an absence of locus. I never believed, as some of my generation seemed to, that travelling of itself was a kind of means of discovering oneself. I have absolutely no interest in discovering myself, nor anybody else for that matter. But I am drawn to Cuernavaca, not only for its alleged beauty, for the fact that it lies Under the Volcano and is the setting for Malcolm Lowry’s magnificent novel of that name, but in part at least because my late friend, Petros Prasinaki, aka Igbar Zoff, aka Peter Green came here sometime in the mid to late 197os in order to spend his inheritance, search for Lowry’s ghost and drink mescal, an example I will not be following. But I have a copy of Under the Volcano with me, just in case.

I am leafing through a notebook and I find a terrifying quotation from John Cheever, and though I have no idea when I copied it down, it would seem to come from Cheever’s journals:

When the beginnings of self-destruction enter the heart it seems no bigger than a grain of sand. It is a headache, a slight case of indigestion, an infected finger; but you miss the 8:20 and arrive late at the meeting on credit extensions. The old friend that you meet for lunch suddenly exhausts your patience and in an effort to be pleasant you drink three cocktails, but by now the day has lost its form, its sense and meaning. To try and restore some purpose and beauty to it you drink too much at cocktails you talk too much you make a pass at somebody’s wife and you end with doing something foolish and obscene and wish in the morning that you were dead. But when you try to trace back the way you came into the abyss all you find is a grain of sand.

Although reflecting a certain kind of mid century American machismo – ‘you make a pass at somebody’s wife’ – where the working day would characteristically end in cocktails, there is a truly awful angle to the idea that the tiniest thing, the smallest discomfort or inconvenience might send a person reeling into oblivion. How many times has that happened, and how many times have we told ourselves it cannot, must not happen again?

And that image of the grain of sand is so entrenched in our consciousness, because we are used to regarding the grain of sand as the minimal unit of matter (which, along with the speck of dust, it was before the advent of atomic physics) and we reduce every small beginning to just such a tiny item. ‘To see a world in a grain of sand’ according to William Blake’s ‘Auguries of Innocence’, is a familiar allegory to every armchair mystic.

And what Cheever is saying is not confined to the experiences of a recidivist drunk: it applies to anyone who has ever felt that quiet sliding out of control, the slow-motion disaster that the smallest, slightest disharmony begins to offset, and the offhand remark (or the not-so-offhand remark) the spillage, foot placed firmly in it, the unforeseen riposte, the fist raised, the threat made, the words that appal, the moment at which you take a step that cannot be retrieved, definitively.

Though, on the upside, that can be quite refreshing. Walking out on a job, while giving one’s boss an earful, might be the most gratifying thing that ever happens to some people.

Which brings us, in a roundabout way, to the economy and the leaders of Europe all mouthing off about how we must do this and can’t do that, and the demos in Madrid and Nueva York (with Naomi Wolf in her evening gown, for whom I can’t feel too much sympathy, although I agree with her in principle) and the poor Greeks at the end of yet another bollocking from the Germans, and meanwhile the bankers, the bastards who got us in this mess, all have their snouts back in the trough again as if nothing had happened.

Which brings us logically to the rugby world cup final.

I never thought for a moment that the French would get ‘blown away’ in today’s match as Wales’ outstanding scrum-half Mike Phillips predicted in the heat of the moment after his team’s unlucky defeat in the semis. And on the day les bleus came good, playing more positive rugby than they have all tournament. I must confess, after indulging in a week of blatant francophobia, I was egging them on to score in that final onslaught before New Zealand regained possession of the ball. Maybe it was just a perennial desire to support the underdog. But it would have been a bitter irony for France to have walked away with the world cup, after losing to Tonga in the group stage.

So that’s done. It was all a bit of an anti-climax here in Cardiff, as everyone was rooting for a New Zealand-Wales final (and I had money on it). But despite losing to South Africa, France and Australia, the Welsh players have nothing to be ashamed of; in fact they done us proud.

Blanco is very much looking forward to the Wales-France match at the Millennium stadium next March, and will certainly be there, although he will not be dressed as a daffodil.