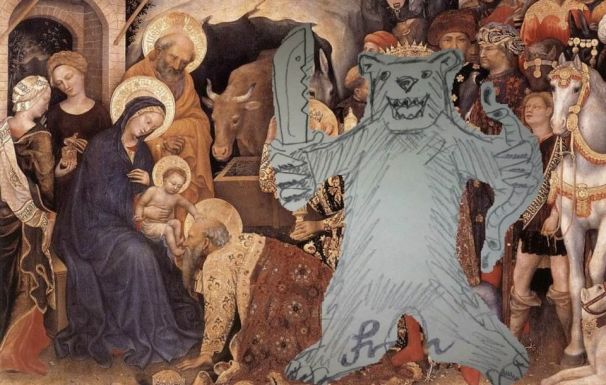 I dreamed last night that American intelligence operatives were investigating the poet WN Herbert, allegedly because, according to dream-logic, he was responsible for – dream quotation marks – ‘blocking up areas of cyberspace that the US security forces deemed particularly sensitive’. In the dream a homeland security spokesman announced on television that the subversive Prof was under suspicion because his online activity was in danger of provoking a conflict with Russia. Bill was in trouble. I decided I had better call him, although I can hardly imagine he would need warning when the CIA had already made such a meal of announcing their investigation on TV. And besides, according to the previous day’s FB posts, Bill was in Crete: would he have signal there? And his phone was bound to be bugged. Perhaps I had better email. Same problem. Poor Bill. What would he do? What could I do to help?

On waking, I wonder where this particular dream has come from. I suspect it may relate to Murder Bear, Herbert’s horrifying ursine trope, perhaps interpreted by the spooks as a code matrix relating to Russian mobilisation on the Ukrainian border. But more likely, on reflection, would be Dogbot Borstal. This bizarre online association, or secret society, clearly harbours individuals of dangerously paranoid leanings, such as Goat Dog, Dumbo Octopus, and other cyphers.

← Eduardo Halfon’s Monasterio and those salacious Romans﻿﻿
Where are the others, Señor British Citizen? →