Tlön, Uqbar, and the girl in the moon 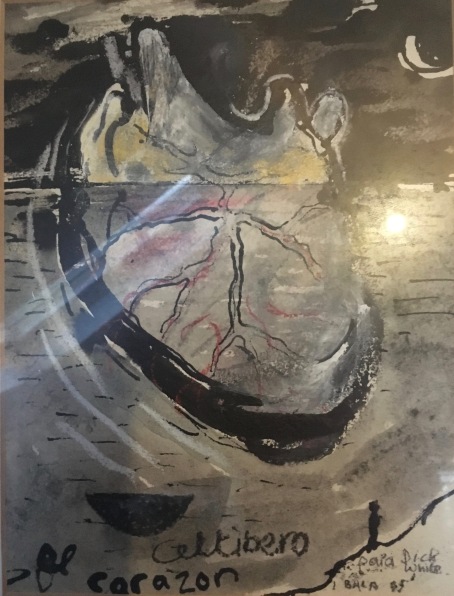 Having fallen ill on the last day of teaching, the accumulated tensions of the  semester finally erupting in an onslaught of snot, fever, and a hideous, raucous cough, I take to my bed in the hope that rest and warmth, accompanied by mugs of hot lemon and honey, will heal me. Given the horizontal advantage, after drifting in and out of sleep over the course of Saturday afternoon, cold rain pelting at the window, my thoughts drift, if not into unconsciousness, at least toward the unconscious.

Aware as I am of the various scribblings of Freud and Jung on this subject, and dawdling on YouTube, the opportunity arises to watch Jordan Peterson give a class on psychoanalytic theory. Curious to learn what the much-maligned Peterson has to say on this topic (delivered by way of a somewhat cursory psychoanalytic reading on the film Mulholland Drive) I find that – according to Peterson – Freud saw the unconscious as the place of hidden or ‘disguised secrets’, while Jung regarded it as the place of ‘knowledge that had not yet come to be’.

Leaving aside whether or not Peterson is correct in his framing of this difference, the notion that there is another version of knowledge that has ‘not yet come to be’ is intriguing, and certainly corresponds with my understanding of Jung, and of his followers Joseph Campbell and Marie-Louise von Franz, to name but two. But how are we to balance the world of everyday, conscious, ego-driven perception, with the restless, seething mass of subterranean ‘knowledge’ provided by the unconscious?

Having posed this question, I am pleased to come across two indications of how this might be translated into a clearer understanding. The first arrived later in the day when, still idling through YouTube, I find an account given by Marie-Louise von Franz about her first encounter with Jung, when she was eighteen years old and the Swiss psychoanalyst was fifty-eight, an age, the young von Franz thinks, which makes him ‘ready for the cemetery.’ Nevertheless, von Franz is enthralled, and she continues:

‘He [Jung] told that story which you can read in the Memories (Jung’s autobiography, Memories, Dreams, Reflections) about this girl who was on the moon and had to fight a demon, and the black demon got her. And he pretended, or he told it in a way as if she really had been on the moon and it had happened.

And I was very rationalistically trained from school so I said indignantly, “But she imagined to be on the moon, or she dreamt it, but she wasn’t on the moon.”

And he looked at me earnestly and said, “Yes she was on the moon.”

I still remember looking over the lake there and thinking, “Either this man is crazy, or I am too stupid to understand what he means.”

And then suddenly it dawned on me, “He means that what happens psychically is the real reality, and this other moon, this stony desert which goes round the earth, that’s illusion, or that’s only pseudo-reality.”

And that hit me tremendously deeply. When I crawled, rather drunk into bed because he gave us a lot of Burgundy that evening, I thought, “It will take you ten years to digest what you experienced today.”’

In terms of our understanding of the unconscious, this story’s insistence that psychic reality is no less real than the reality of the everyday is, to say the least, instructive.

It is worth bearing in mind, at this point, that the unconscious, according to Jung, has no sense of its own or its bearer’s mortality, and is not constricted by any kind of temporality. The past, the present and the future are equally at its disposal.

Now, this morning, not entirely at random, I find myself re-reading Borges’ story ‘Tlön, Uqbar, Orbis Tertius’, in the translation by Alastair Reid, where Borges describes a fictitious country (Uqbar) whose mythology originates in a mysterious world called Tlön.

I come to stop at a passage describing one of the ‘oldest regions of Tlön’ in which ‘it is not an uncommon occurrence for lost objects to be duplicated. Two people are looking for a pencil; the first one finds it and says nothing; the second finds a second pencil, no less real, but more in keeping with his expectation. These secondary objects are called hrönir and, even though awkward in form, are a little larger than the originals.’

Putting it simply – and in terms that Borges himself might well have avoided – Tlön is the unconscious of Uqbar; the realm of myth and dream. And for the sake of the story I’d say that within the unconscious, the search for the pencil results in two discoveries: in one of these the pencil is the ‘authentic’ pencil that the protagonist lost, and in the other version, the pencil is a simulacrum (or hrön), a possible version of itself.

Would it be too much to map that idea from von Franz, of the ‘reality’ of unconscious experience onto this discovery of the ‘real’ pencil; with the second, somewhat clumsier, more ‘awkward’ and ‘larger’ (as in ‘larger than life’) second pencil corresponding to the ‘real life’ acting out of the story of the girl and the demon? By which I mean, of the two pencils, the ‘original’ is the one that appears to the psyche; the second, to the world? And if there is a second pencil, no doubt there exists a third; in other words multiple hrönrir representing the infinite versions of oneself and one’s actions in the multiverse (see Blanco’s last blog but one).

Or has my head cold taken this beyond the grasp of the intellect alone?

In a manner that is never clearly elaborated, the artefacts and objects of Tlön have infiltrated our own world. In other words: ‘Contact with Tlön and the ways of Tlön have disintegrated this world.’ Things do not unfold well in Borges’ story.

Although first published in 1940, the postscript to Borges’ story is dated 1947. In other words he places the postscript to his story seven years after its publication, by which time World War Two has ended, and a New World Order is taking shape. This information (unknowable to Borges at the time of his writing) lends particular valence to the following paragraph:

‘Ten years ago, any symmetrical system whatsoever which gave the appearance of order – dialectical materialism, anti-Semitism, Nazism – was enough to fascinate men. Why not fall under the spell of Tlön and submit to the minute and vast evidence of an ordered planet? Unless to reply that reality, too, is ordered. It may be so, but in accordance with divine laws – I translate: inhuman laws – which we will never completely perceive. Tlön may be a labyrinth, but it is a labyrinth plotted by men, a labyrinth destined to be deciphered by men.’

I check out critical responses to the Borges story, and then recall, among the many commentaries, Peter Gyngell’s unpublished PhD thesis, The Enigmas of Borges, and the Enigma of Borges (2012). Gyngell considers ‘Tlön, Uqbar, Orbis Tertius’ to be, to some extent, a reflection on ‘the scepticism and despair for Argentina’s future that Borges shared with his contemporaries in the late 1930’s; and, above all, a reflection of his fears at that time of the domination of Argentina by the new and growing imperial power of the USA.’ In Gyngell’s reading, the takeover by Tlön represents the commercial and cultural influence of the USA permeating the world.

‘I would also submit’, writes Gyngell, ‘that Tlön is not a complete success. The reader is presented not only with two totally incompatible themes — heavy philosophical satire and economic politics — but also with a story that is overwritten, at least by Borges’ standards. ‘Tlön’ is the longest story in the Collected Fictions; and I suggest that this is brought about, at least in part, by Borges’ vain attempt to reconcile its irreconcilable themes.’

I personally still retain a fondness for the story – which was the first by Borges that I ever read – particularly for the following paragraph, with which I will end this post, and which I remember citing in my first essay as an anthropology undergraduate many years ago; apropos of what precisely, I simply cannot remember:

‘Things duplicate themselves in Tlön. They tend at the same time to efface themselves, to lose their detail when people forget them. The classic example is that of a stone threshold which lasted as long as it was visited by a beggar, and which faded from sight on his death. Occasionally, a few birds, a horse perhaps, have saved the ruins of an amphitheatre.’

Don’t go in there, kiddo. To climb in there would just be wrong. There’s a whole world out here waiting to be explored without having to resort to Deep Throat here. Its ravening scarlet depths offer no safe haven, and while vagina dentata is almost certainly a paranoid delusion of the male psyche I know that for once I am right – both as a role model and as a caring individual – when I say that going back in there is simply not an option. 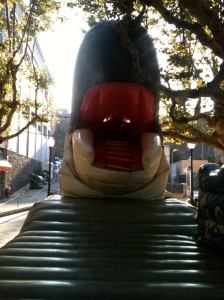 If this were simply a dare – the kind of challenge we set ourselves as children: “would you rather have your face eaten off by ants or your bum chewed up by a crocodile” – I might, if I were in your shoes, even be tempted to climb inside the Great Maw, especially after considering the alternative, squarely enclosed beneath the paraphernalia of the State and the chilling motto TODO POR LA PATRIA: EVERYTHING FOR THE FATHERLAND.

I am caught in a dread panic: the all-consuming maternal maw or the brutalising paternal state? Help me please, Western Psychotherapy, help me Father Freud and Professor Lacan, for caught between the twin realities of the Civil Guard and the Great Shark-Mother, I have lost all inclination to make choices, and for this have (a) lost the will to carry on, (b) become an addict and fallen into hopeless ways, (c) joined a paramilitary outfit, or something official-sounding that promises travel and a good pension,

These, my lad, are the choices we have to take before beginning the definitive journey. So think a little, before climbing into that thing. And remember to wear a hat in the sun.