The Third Reich, by Roberto Bolaño 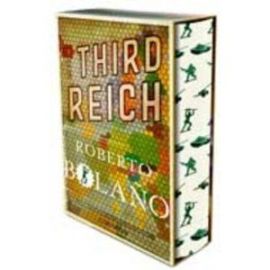 In La Universidad Desconocida, the collected poems that Roberto Bolaño’s widow, Carolina López, brought together after her husband’s death in 2003, she includes in the foreword an unpublished piece called ‘My Literary Career’ that Bolaño had scribbled in anguish after receiving serial rejections from all the publishers of Spain, which he lists fastidiously, and then: “under the bridge, while it rains, a golden opportunity / to see myself for who I am: / like a snake at the North Pole, but writing. / Writing poetry in the land of imbeciles.” Clearly Bolaño was under no illusions as to the readiness of the literary world to embrace his work. The poem is dated 1990, a year after The Third Reich was written, in longhand. We do not know what plans Bolaño might have had for the manuscript, which by the time of his death he had begun to type out and tinker with: it may well have come into print in a completely different form. Or not at all.

Udo, a German board-games champion, takes his girlfriend, Ingeborg, on holiday to the same hotel he last visited with his parents ten years earlier, as a fifteen-year old. They meet another German couple, Hanna and Charly, and with the help of a couple of local no-good-boyos called the Lamb and the Wolf, they do the nightclubs and bars of the resort by night and lie on the beach by day. Charly turns out to be a bit of a liability, and following a mysterious incident in which he appears to have assaulted his girlfriend, he takes his surfboard out to sea and does not return. Hanna and Ingeborg go back to Germany but Ido, a loner and a nerd, stays on in the resort, ostensibly to wait for Charly’s body to be washed up, but actually to carry out a forlorn pursuit of the hotel owner, Frau Else. At this point the narrative wavers, becoming repetitive and somewhat listless, and although there are hints towards a darker centre, there is nothing particularly threatening about the local lowlife, not even El Quemado, the disfigured South American who rents out pedal boats, and whom Ido adopts as his opponent in the marathon board game that gives the book its title. There are vague allusions towards a deeper connection with Nazi themes – notably with Frau Else’s husband, a tall, moribund character who seems oddly prescient of the writer Archimboldi in 2666 – but they only lead to dead ends.

As it is, The Third Reich, despite the promise of the opening half, is a strange and ultimately unsatisfying book. It feels incomplete, but that is not the problem: what this novel lacks is that paradoxical sense of intentional incompleteness, the unwillingness or refusal to tie up loose ends (perhaps because they retain more intensity for being left hanging) that is a marker of Bolaño’s mature style.

Ignore the cover blurb’s suggestion that this is the perfect place to begin reading Bolaño: it is not, and anyone unfamiliar with his work would be much better off reading By Night in Chile or The Skating Rink, another novel modelled on the seaside town of Blanes, where Bolaño settled in the 1980s. If it were not for the fact that it is an early work by a highly marketable author The Third Reich would probably not have been published. But for Bolaño’s many fans it displays, in emergent form, some of the themes and tropes that would be more abundantly explored in The Savage Detectives or 2666. Like those two great works, it is beautifully translated by Natasha Wimmer.

This review first appeared in The Independent, on 1 March 2012.

3 Comments on “The Third Reich, by Roberto Bolaño”