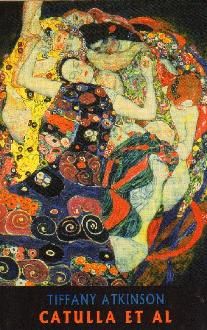 Once, about the time you start to notice trees

and he found out his wife was not his wife

in any sense but name, Elijah took the dog,

two apples from the sideboard, and went out.

Not long afterwards, he came upon an old friend

bent beneath the bonnet of his car, cursing

every sprocket of combustion engines. What

do you suppose the point is? asked Elijah.

And the friend replied, I have to be there.

Throw your spanners down and come with me,

Elijah said. And so the friend did. And his name

was Tomos, after whom he never thought to ask.

And Elijah was amazed. Next there was a daughter

which, close up, they didn’t know. But Tomos said

she looked a lot like his girl would’ve had she lived.

He split one apple threeways, and the girl laughed.

And her laugh was as a pocketful of loose change,

as the moment when you down your pint and dance.

Her name was Manon. She was heading to the clinic.

Then she got her mobile phone out. Mam? she said.

So from there they went north, telling stories. Till

they came upon a farmer, bitter drunk, for all his fields

had failed. They listened, picking fruit seeds from their teeth,

and where those fell sprang cider-presses, booming.

Soon a crowd came out to see what had been happening.

said Elijah. Sell your house, give all the money to his folks

and walk with us. The man did. He gave nobody his name.

Meanwhile the crowds grew till there wasn’t room

to slide a slice of toast between them. Tomos asked,

what’s this about then? And Elijah said, just as you

left your hurtful car to walk with me, so this lot feel.

Look at the rhododendrons! They don’t give a toss

about the funding cuts, the polar bears. They do

their own thing. Throw your keys into that hedge,

ignore the cameras. Be your own true kicking self.

So Tomos did. He was a simple man, and able

to draw truth like tears from anyone. Elijah said,

you know the way that pressure-regulating valves

At this the grief beat out like crows, and Tomos felt

a hatching, in the space, of light. Elijah felt it too. And

where they left a third, unheard-of apple, grew a hamlet,

grew a village, grew a town, where people started over hope

fuller than all the Born Again Virgins of America.

These are the words of Manon, set down with the baby

on her knee. Elijah Tomos, he’ll be. All this happened.

From Catulla, Bloodaxe, 2011. For a review of this book, click here.

← The Third Reich, by Roberto Bolaño
Waiting for Godot and Caspar David Friedrich →