The unicorns and the ghost in the wall 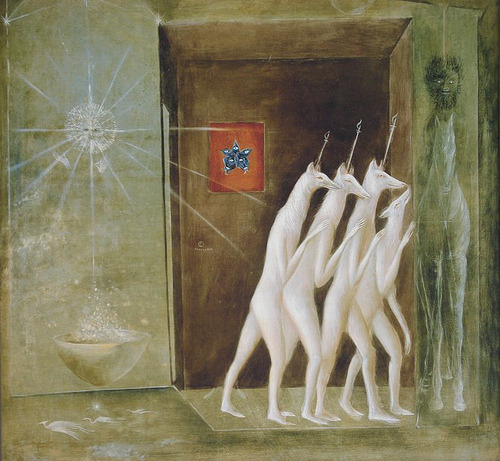 Leonora Carrington. The unicorns and the ghost in the wall

I try to imagine what they are thinking, and realise that not even they know this; that perhaps they are not capable of thought. Either that, or their thoughts are concerned with subjects so remote from anything I consider to be ‘thoughts’ as to make any comparison pointless. So instead I concentrate on the details. They are trying to reach the ghost in the wall and the ghost in the wall appears to be a white horse being ridden by a very hairy man. The first and smallest unicorn, the only one without a horn, is pawing at the wall imploringly, as if to stroke the horse’s shank: ‘please come out of the wall oh ghost-horse, join us on this side.’ The middle of the three larger unicorns, the small unicorn’s mother, perhaps, is muttering something under her breath. But where is ‘this side’? The room in which a large basin glides above the ground, its contents bubbling madly, a red picture hanging on the wall, and what appears to be a starfish with an eye at the end of each limb or tentacle or whatever the pointy bits of a star are called. White water birds emerging from a state of disappearance or nonbeing, and seeming to take off from the floor.  And I am trying to remember where I saw all this, because I have seen it before, have even had a conversation, or tried to, with the rider, one Colm Walker from County Wicklow, but he could not speak because he was too busy watching the unicorns and because he was condemned to remain forever on the other side, and because like all ghosts, he was a creature of habit, and he would never change.

← I have wasted my life
What if the future determines the present? →